The Spy in Bangkok 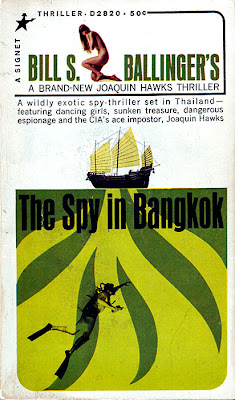 The Spy in Bangkok by Bill S. Ballinger
Published by Signet in December 1965 (1st Printing)


I began this book without having read any of the other books in the series and was immediately drawn into the story of CIA Agent Joaquin Hawks. The story starts out with Hawks in a prison cell on an island somewhere in Southeast Asia. He was captured when he was washed off his ship during a storm and is awaiting to be executed for spying. I was immediately hooked with this opening chapter, but I am curious if the events preceding his capture were told in the previous book.
Hawks is rescued by his contact, Dak, at the last moment and they make their escape. They head on over to Bangkok and the main plot begins. Hawks has been investigating an American by the name of Turlock and his yacht, the Santanya, is currently anchored in the harbor. Turlock is our main villain and he's a weapons dealer who made his fortune buying up war surplus at the end of World War II. Somehow, he's managed to get a hold of some nuclear warheads and it's Hawks mission to not let them fall into enemy hands.
Disguising himself as a Mexican guitar player, Hawks gets a job at the local nightclub where Turlock has been frequenting. He also gets mixed up with the beautiful dancer who works at the club. Hawks ingratiates himself with Theda Ray (punny isn't it?), Turlock's main squeeze, and is hired to perform on the Santanya for a dinner party. While on board, he discovers an antique cannon mould which was recently stolen from a local museum.
Reaching shore, after being caught by one of Turlock's goons, Hawks heads back to the dancer's pad to pick up his gear, but gets into a spot of trouble when her ex-lover shows up with the local police who don't act too kindly towards him. After some fisticuffs, Hawks manages to elude the police, but has lost precious time. The Santanya has already left port which means Dak and his men have followed orders and are tailing the ship, leaving Hawks stranded in Bangkok.
A few days later, Hawks reaches Sawan and meets up with Dak and Turlock. A Chinese Junk has been seen quite a bit in the area and has unloaded a series of crates that were delivered to the local mine, which just so happens to be owned by Turlock. Sneaking around the island, Hawks busts into the abandoned mine shaft were the delivery was sent to find the nuclear missiles and several large blocks of solid gold.
They tail the Santanya again and watch as they dive overboard and do some underwater work in a remote area down the coast in the Gulf of Siam. When Turlock leaves for the day, Hawks takes a look where they were diving to discover an old shipwreck and Turlock's plan is made clear. He plans to melt the gold down and make cannons out of it with the mould. He'll then paint them up, add some concretions and "salvage" them from the wreck. What better way to smuggle gold back into the United States?
A new plan is formed with a corrupt local official who doesn't quite follow Hawks' plan and the whole thing almost goes sour. But they manage to attack the Santanya while the salvage operation is under way, but before Agent Hawks arrives, Turlock, his goons and the corrupt local are killed. He manages to save Theda from the pirates and they head back to port where, during the night, he plants three bombs on the Chinese Junk while the warheads are being loaded. They follow at a safe distance and sink the ship somewhere in the South China Sea. Mission Accomplished.
Bill S. Ballinger wrote a total of five Joaquin Hawks adventures, The Spy in Bangkok being the third in the series. I don't regret reading this one, but there were a few things that I didn't care for. The most damning of them being not having a compelling villain. Let's face it, this book, like most of these spy adventures, are trying to cash in on the Bond craze of the sixties; and having such a weak villain just doesn't work for me. I mean he's hardly in the story at all and does not come off as much of a threat. Turlock is forgettable and he's even killed off-page by a minor character. While not bad, but I don't know if I'll be seeking out any of the other books in the series.
Posted by Cinema Raiders at 9/26/2012