Another Disappointing Release of Death Wish 2 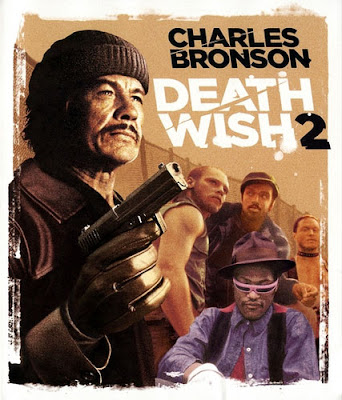 MGM and 20th Century Fox have done it again, and that's not a good thing. They recently released Death Wish 2 on blu-ray, and they keep dropping the ball.  It's like they don't even care about this series and I find that inexcusable. The entire release isn't a total write-off as the picture and sound quality are very strong. I'd go so far as to say that this movie will never look or sound better unless they spend the money for a full Lowry Digital restoration. They even went to the trouble of creating some new cover art instead of recycling the rather unattractive ones they have been using for years. While I still would have preferred the original poster artwork, I really do like the cover.

That leads to the question: What did they do wrong?  The answer:  Everything else.

To start with, they did something that I truly hate on any release - the absence of any menus. After the standard warnings and logos, the film beings to play. You can press the menu button to your heart's content, but there isn't one. They only included one of those lame pop-up menus while the movie is playing.

The next mistake is the lack of special features - you only get the movie's theatrical trailer and that's it. While I don't know if there are any vintage featurettes from 1982, there is a rather interesting interview with director Michael Winner that is floating around YouTube, which was sadly not included. After watching that interview, I'm pretty sure he has something to say about the movie and a commentary track would have been a very nice addition.  None of the alternate scenes found on the Greek VHS were included either.

But the most egregious error was the use of the cut, watered-down version yet again. Why do they keep doing this to us? Let's face it, most people who buy Death Wish 2 on blu-ray are going to be fans of the movie and they are going to want the complete version. This is especially confusing when you learn that MGM have been playing the uncut version on their HD cable channel and, or so I've been told, have been streaming the uncut version on Amazon and Netflix (it has since been removed from Netflix).  To add insult to injury, they even used one of those damned eco cases!

While this release is far from ideal, it is at least better than the lousy DVDs they've been selling for years. I would recommend the purchase of Death Wish 2, 3 & 4 on blu-ray if you're a fan of the series; but not at the full retail price. These releases are so lackadaisical and cheaply produced that they have the five dollar budget bin price written all over them. Shame on you once again MGM!
Posted by Cinema Raiders at 9/06/2012