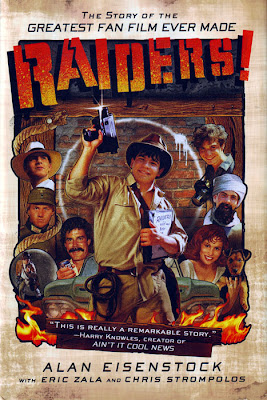 Raiders! by Alan Eisenstock
Published by Thomas Dunne Books in November 2012
Raiders! truly is the story of the greatest fan film ever made. Years ago, I had the opportunity to attend a screening of Eric Zala and Chris Strompolos' Raiders of the Lost Ark: The Adaptation and I was blown away by it. While the quality of the video wasn't the greatest, what impressed me most was how this group of kids managed to pull off a (relatively) shot for shot remake of my favorite film of all time. What they lacked in props, locations and special effects, they made up for with passion and excitement that resulted in pure magic.
Raiders! is the behind the scenes story of how they managed to pull it off (which only took seven years). The ingenuity that went into the movie is astounding. The basement became their studio which held sets for the Well of Souls, complete with overhead entrance created by removing an old furnace and even The Raven Bar in were Indy goes to find . And, yes, they even set fire to the place, just like in the movie. Unable to find a monkey, they trained their pet dog to take on the role. After a few attempts, they even managed to get a six foot boulder for the South American temple and they even filmed the entire truck chase. The only scene missing from The Adaptation is the flying wing sequence because they couldn't find anyone to let them blow up an airplane.
It wasn't all pleasant for everyone involved though. As the years went by, friendships were strained and tested as the kids grew up and apart from each other. The book follows the entire story from the idea's conception, through filming, editing and on up through the present day. After years of having the complete film sitting on their shelves, Steven Spielberg was finally given a copy and wrote letters to the filmmakers congratulating them on their achievement. It's all here for you to read, and aside from the opening chapters about repairing a home in post-Katrina (this part is a real chore to get through), it's a great read. But be warned, after reading this book, you will want to watch Raiders of the Lost Ark: The Adaptation, but it's not commercially available anywhere.