Never Get Out of the Boat 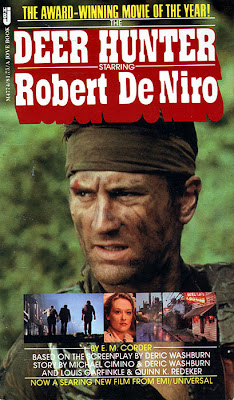 The Deer Hunter by E.M. Corder
Published by Jove in March 1979 (2nd printing)

He was a young steelworker from a sad little hill town in Pennsylvania. Nothing had prepared him for war in the jungles of Asia... nothing except the hellish heat of the blast furnaces... gut-searing boilermakers... the trailer life... and the strength of his passion for hunting the great deer of the Alleghenies.

The deer hunter was young, but he had steady nerves, the grace of a cat, and the high mountain passes in his heart. He would need all of them to survive.

A deeply moving story of courage and friendship set against the terrifying odds of war. 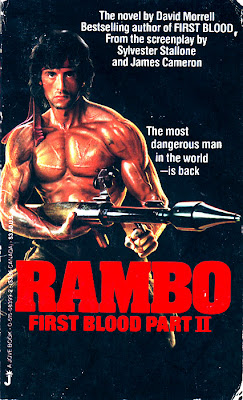 Rambo: First Blood Part II by David Morrell
Published by Jove in May 1985

John Rambo. Vietnam vet. American. First Blood unleashed the fury of his rage. Now in prison for his bloody one-man war against a small-town sheriff.

Colonel Trautman. Green Beret. Rambo's former commanding officer. With a signed release form - if Rambo will take on what would be a suicide mission for most men.

One:  Penetrate the remembered jungles of Hell, and find the missing Americans who are still being tortured there.

Two:  Don't rescue them. Only bring back photos. Don't engage the enemy. Don't get revenge.

For Rambo, the first part is tough.
The second, impossible... 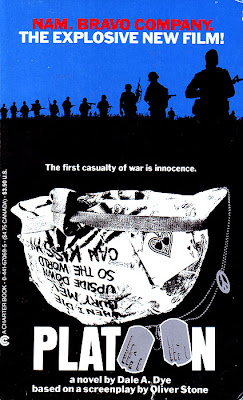 Platoon by Dale A. Dye
Published by Charter Books in December 1986

They were the men of Bravo Company. Officers and grunts. Black and white. All of them Americans. It was war that brought them together - and it was war that would tear them apart. This is their war - a war of camaraderie forged in violence and of brutality born of madness. This is their story - gritty, unflinching and real.

A novel by Dale A. Dye, a Vietnam veteran who served 21 years in the Marine Corps and was technical advisor for the film.

Based on a screenplay by Oliver Stone, a decorated infantryman who spent 15 months in Vietnam. A screenwriter with Midnight Express, Scarface and Salvador to his credits. Stone was one of the men of Platoon - and he still is. 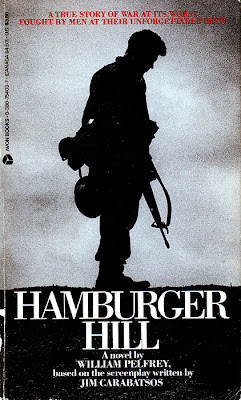 Hamburger Hill by William Pelfrey
Published by Avon Books in 1987

In ten days, they lived a hundred lifetimes...

Ten days and 11 bloody assaults later, the men who fought there called it...
Hamburger Hill

A brutal testing ground of courage, sacrifice, and the kind of brotherhood where a buddy's life meant as much as your own... and sometimes more.