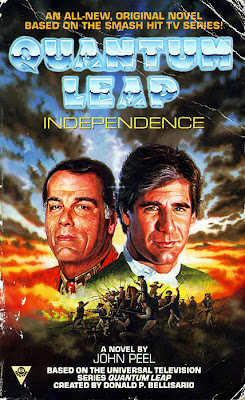 Dr. Samuel Beckett finds himself leaping into Samuel Beckett, and into trouble, on the eve of the Revolutionary War. The plot revolves around Sam and Al trying to figure out what they need to put right without changing the outcome of the revolution. This normally wouldn't be so hard, but the Sam Beckett from 1776 isn't cooperating for fear of a British trap, and to top it off, access to him has also been restricted for fear of contaminating the timeline.

Sam finds himself being forced to join the Committee of Safety, which is basically a group of overzealous patriots who bully Tories that they have a personal grudge against. From the minute Sam begins his mission, he is in trouble as several members of the Committee are out to frame him as a traitor; which is made easy when he saves the life of a man the Committee has decided to run out of town, quits the Committee with his friend Isaiah, and is seen meeting with a known British spy - it just happens that he's actually a double agent for the patriot cause.

With a little trial and error, it is determined that Sam is here to save Isaiah's live during the Battle of Brooklyn. The task would normally be challenging, but it's made even harder when he's captured and beaten by the Committee while his wife, Hannah, is shot trying to help him. Some derring-do, and a little help from Al, sees Sam escape, get Samuel Beckett's wife and son to safety and rescue Isaiah. To confound matters a little more, Sam is strongly attracted to Hannah and he has the moral obligation to not act on it.  It later turns out that she is the spitting image of his own wife, who he can't remember with his swiss-cheesed mind.

While this is the first Quantum Leap book that I've read, I'm no stranger to the series; and I think that a knowledge of the show is a requirement for the enjoyment of the book. Some story points and characters are not explained very well and relies on the assumption that if you're reading this book then you already know all about the story points from the television show. While I quite enjoy the show and the time period, it goes without saying that I enjoyed this book. I found the feeling of the show is captured quite well within the pages of the book. Quantum Leap: Independence delivers a fun adventure story with a few added touches from the series that enhances the human drama - the loneliness of being "trapped in the past, leaping from life to life, putting things right that once went wrong, and hoping each time that his next leap will be the leap home."