Hunt Through the Cradle of Fear 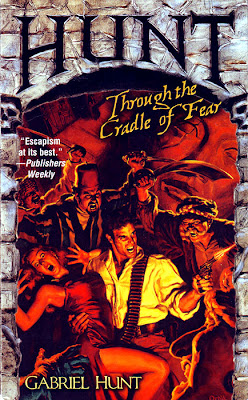 This is the second of six books in the adventures of Gabriel Hunt series. Each book was written by a different author using the name of the main character of the series. From the cover image alone, you know you're in for a pulp hero type of adventure along the lines of Indiana Jones; and that's just what I was looking for. Hunt Through the Cradle of Fear was written by Charles Ardai, the same man who came up with the idea for the Hard Case Crime series.

Gabriel Hunt is the oldest son of two famous authors who mysteriously vanished in the Mediterranean. Using the Hunt's substantial fortune, Michael, the younger son, runs the Hunt Foundation which bankrolls archaeological expeditions for legendary artifacts.
Hunt Through the Cradle of Fear begins with Gabriel Hunt rescuing a lovely damsel in distress named Sheba from the clutches of our villain Lajos DeGroet, a very wealthy Hungarian antiquities collector and Olympic fencing medalist. He brings her back to New York, but before they can determine why DeGroet is interested in her, she is kidnapped once again. After a car chase through the streets of New York, Gabriel manages to sneak on board the villain's plane by hiding in a crate. The plane lands in Egypt and they are taken to the Sphinx where DeGroet opens a hidden chamber in the Sphinx's left paw. Since Sheba is an authority on ancient linguistics, she has been brought in to decipher the inscriptions hidden within the chamber.
Dressing in the traditional Arab desert gear, Gabriel manages to disguise himself as one of the diggers and follows them into the Sphinx. After witnessing a deadly booby trap, which is quite reminiscent of the Breath of God from Indiana Jones and the Last Crusade, Gabriel is chosen to try to go in next, and is found out. With Sheba's help he is able to work out the way through the trap and makes it into the inner sanctum where he discovers an ancient coin and a map showing the way to Greece.

After a brief fight, Gabriel Hunt and Sheba escape DeGroet and his thugs and it's off to Greece where our heroes get into (and out of) several fights and meet an old bard who is a direct descendant of Homer. More importantly, the bard tells them of the Greek influence on the Egyptian Sphinx, the ancient legends of the Sphinxs and he shows them an ancient temple which holds another coin and a second map pointing the way to the Cradle of Fear in Sri Lanka. It turns out one of these legends tells of some terrible weapon that freezes it's victims with fear.

Next, it's off to Sri Lanka, by way of Istanbul where Hunt meets up with his long, lost sister who just so happens to be an ace computer hacker. She rigs up some kind of tracking device that homes in on DeGroet's cell phone and the race is on to the Cradle of Fear. Hunt and Sheba arrive in Sri Lanka shorty before DeGroet and are captured once again. Another secret chamber and a few booby traps later, Gabriel Hunt has thwarted DeGroet's plans and came face to face with the last living sphinx whose riddle he must solve to save mankind from annihilation.

All in all, this series seems to be shaping up nicely; it's a shame there didn't seem to be enough interest to keep the series going (although I've only read the first two books - so far). While not quite as good as some of the better Indiana Jones novels, Hunt Through the Cradle of Fear is a solid, action-packed pulp adventure - some fun summer reading.
Posted by Cinema Raiders at 7/09/2012