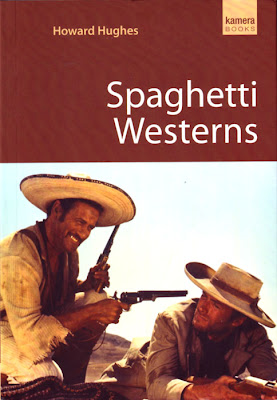 Spaghetti Westerns was published by Kamera Books back in 2010 and was written by Howard Hughes; no, not that Howard Hughes. The book contains an overview of the genre, a reference section for further reading, and a listing of what films movies and soundtracks have been released; but the bulk of the book is a collection of reviews of what Mr. Hughes call the best thirty-four spaghetti westerns.

The book starts out very well with a twenty-five page overview of the spaghetti western genre. This section is very informative and quite a good read. The next few sections are devoted to the movies themselves. I really like how this section was laid out. A short synopsis of the film is given followed by a page or two of background information about the film. Mr. Hughes goes into some behind the scenes information on each of the films covered and it's in this section that I found the most enjoyment. Finally, the author gives his opinion on the movie being covered. The final section of the book is the reference section which gives a listing of spaghetti western books for further reading, which movies have been released on DVD (as of the printing date of 2010), a brief listing on soundtracks and links to websites about spaghetti westerns.

For the most part, I found the film synopses to be accurate, except in a few instances where I wondered if we had watched the same movie. I also tend to agree with a lot of the author's opinions on the movies themselves, except for his harshness towards Duck You Sucker and his enjoyment for the comedy westerns sub-genre. A few of these films are covered in the book and my sentiments are quite the polar opposite of the author's, but that's to be expected in any collection of reviews. On occasion, when referring to other films in the book, the author will sometimes use an alternate title rather than the one most commonly used.

Would I recommend this book? Perhaps. If you're already a fan of the genre and have read any lengthy volumes on the subject, I would probably skip this one. However, if you're brand new to spaghetti westerns and wondering which films may be worth tracking down, then this might be for you. The only other negative aspect of this book is the steep price. The MSRP is £12.99, which is about $21 - rather pricey for a short 160 page book. If anyone is interested in picking this up for your own library, the Amazon Marketplace has used copies for as low as $1.72 plus shipping (as of this writing).

If anyone was wondering, here is a listing of what Howard Hughes calls the 34 Best Spaghetti Westerns:

A Fistful of Dollars
One Silver Dollar
Seven Guns for the MacGregors
A Pistol For Ringo
For A Few Dollars More
The Return of Ringo
Django
The Hills Run Red
Navajo Joe
A Stranger in Town
A Bullet for the General
The Good, the Bad and the Ugly
The Hellbenders
The Big Gundown
Django Kill: If You Live, Shoot!
Death Rides A Horse
Face To Face
The Big Silence
Day of Anger
Cemetery Without Crosses
Once Upon A Time in the West
Today It's Me... Tomorrow You
A Professional Gun
The Price of Power
Sabata
Adios Sabata
Companeros
A Man Called Sledge
They Call Me Trinity
Blindman
Duck You Sucker
Trinity Is Still My Name
My Name Is Nobody
Keoma