Back in the early eighties when Dirty Harry was at the height of popularity, Warner Books put out a series of twelve Dirty Harry novels as part of their Men of Action lineup. The books were all written by Dane Hartman, which appears to be a pseudonym for authors Ric Meyers and Leslie Alan Horvitz. Just remember, "a man's got to know his limitations." 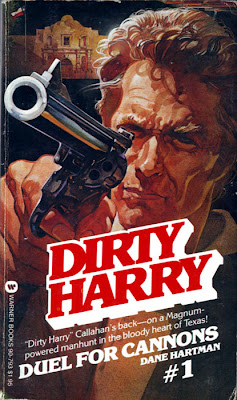 Dirty Harry - The crimebuster nothing can stop, not even the law!

"Dirty Harry" Callahan blasts his way from the mean streets of San Francisco to the blazing byways of San Antonio. His target - a crime boss who's got the whole town, including the cops, under his thumb. Harry's all alone now, with nothing but a .44 Magnum and a bagful of dirty tricks between him and instant death! 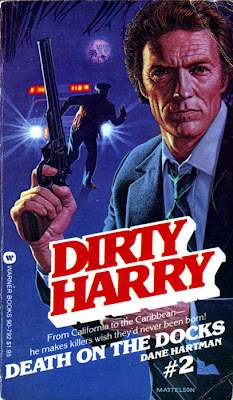 For "Dirty Harry" Callahan, it's a labor of hate
when he busts a labor racketeer!

There are some guys in this world even dirtier than Harry Callahan. Like union czar Matt Braxton, the biggest deal on the docks. He's corrupt enough to be cozy with the Mob, rich enough to afford friends in the highest places, ruthless enough to kill anything that stands in his way. Dirty Harry's standing there all right - and he doesn't intend to give an inch. 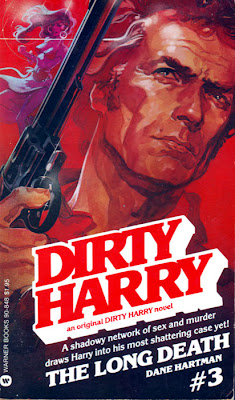 Dirty Harry - The cop more savage than any criminal alive!

Someone is grabbing young women from the bars, campuses, and streets of San Francisco and doing unspeakable things to their minds and bodies. Someone is setting up cops against black nationalists in a violent inter-city war, playing both sides for bloody fools. Someone is looking for deadly trouble when a gorgeous policewoman baits "Dirty Harry" Callahan into a showdown that can only be settled by bare fists and Magnum lead! 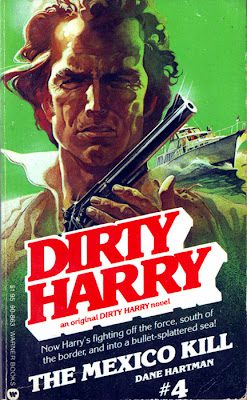 "Dirty Harry" is on a rampage against a mob-run dope network
only he can bust!

Not even losing his badge can keep "Dirty Harry" Callahan away from Magnum-powered action. Now Harry's working for a millionaire, and battling dope-running sea pirates from San Francisco to Mexico's heroin-packed shores. Behind the scenes and the big guns is his old enemy Father Nick. An underworld kingpin and ex-con, Nick can't let the past die - and Harry won't let the mobsters live! 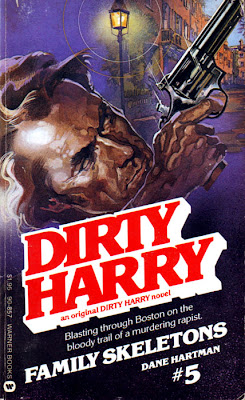 For "Dirty Harry" it's a homecoming in hell as he blazes through Boston's combat zone!

"Dirty Harry" Callahan stalks a mass murderer through Boston's infamous underworld where crooked cops are usually looking the other way. Once it was the Boston Strangler - now the killer's got a knife and is carving up college girls. Dirty Harry will slice through the slime to find him. 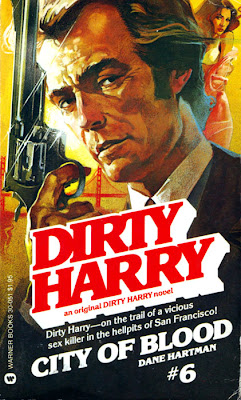 Only "Dirty Harry" Callahan can stop the "Snuff" Psycho
on his 'Frisco rampage!

Winos brutally slain on San Francisco's skid row. Beautiful young women butchered in the act of sex by a perverted killer. The acts of two men - or one? Not even Dirty Harry knows. But he's going to find out, if he has to break every law to do it. From 'Frisco's sexual underground to the boardrooms in the city's sky, Harry plunges into a blood-streaked manhunt that will leave only one survivor. 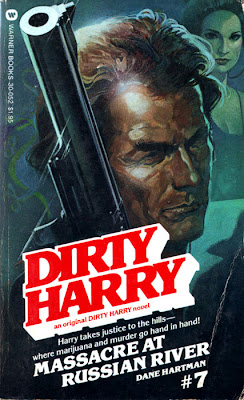 "Dirty Harry" Callahan - He fights for the law of the land,
he lives by the rule of the gun! 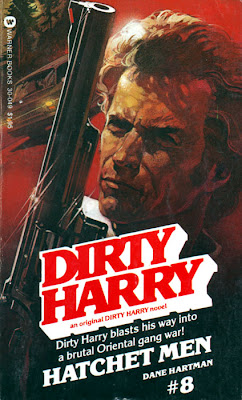 East meets West in a blaze of fury!

From the hills of San Francisco to the towers of Chicago, a savage struggle for power rages between Japanese and Chinese mobsters, expert killers with hand, sword, or gun. Then they kidnap Harry Callahan's beautiful, part-time lover. Enter the dragon, Dirty Harry - Magnum blazing! 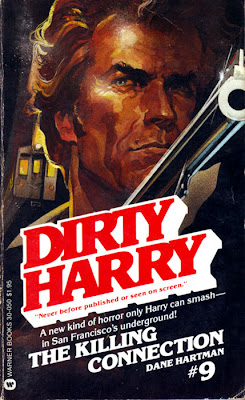 Anything goes in San Francisco, but now it's gone too far! Somebody is carving up beautiful lesbians - and that somebody has the right friends. Only Harry can stop the slaughter, but now both the gays and the cops stand in his way. Will he have time? The answer is at the end of a barrel - a .44 Magnum barrel! 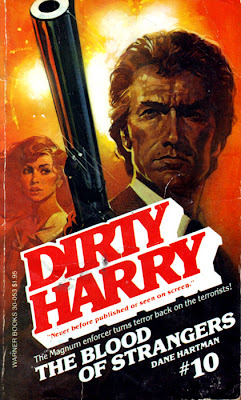 Dirty Harry - Breaking the rules and making his own!

Terrorists! Airports and public places are their stage. Civilians are their targets. The spread of chaos is their game. Now Dirty Harry wants to play - for keeps. On battlefields from Frisco to Beirut to El Salvador, in the company of a beautiful TV newswoman, he leaves a trail of hot blood and bullets as he searches beyond the Libyan connection for the source of this savagery. Dirty Harry - breaking every law to get the criminals, making his law to fit the crime. 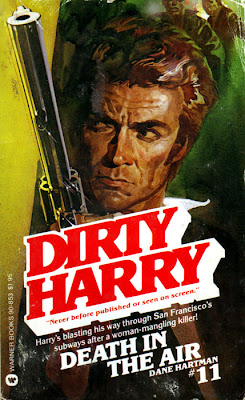 Dirty Harry is gunning for blood - stalking a killer protected by the power of the US government!

The Magnum-powered action doesn't stop for Dirty Harry - not even on Christmas Eve. Now Harry's after a killer who celebrates the holiday season by shoving women beneath the wheels of speeding subway trains. But when he unmasks the killer as a hitman for a renegade government scientist, Harry himself is marked for death. With the most powerful handgun ever made in his hands, Harry must blow that scientist to kingdom come or never live to see the New Year himself. 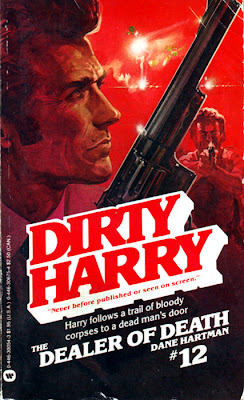 That's what the papers are calling Dirty Harry. Some dude who's no friend of Harry's has lifted his prize Magnum and is blasting some of his worst enemies out of this world.

Harry wants to get his name clean, his gun back, and put an end to the "dead man" who's playing Harry's hand in a game of life and death.