While perusing the wares of the various vendors at the Printer's Row Book Fair last year, I stumbled across the Man From O.R.G.Y. books written by Ted Mark. Judging by the cover, which used the poster artwork for the Eurospy flick Dick Smart 2.007, I assumed these would be a more risque James Bond spoof, so I purchased the first two books in the series. Well, I finally got around to reading the first one, The Man From O.R.G.Y., and it's not what I expected at all.

From some cursory internet research, it appears that during the heyday of the Bond Phenomenon in 1965, Lancer Books began publishing this series starring Steve Victor who isn't really a secret agent. There were a total of fifteen books in the series which ran up until 1981. The Man From O.R.G.Y. also paved the way for a whole slew of other Bond spoof series. 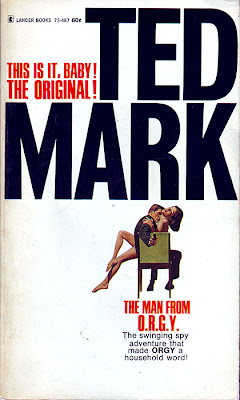 The Man From O.R.G.Y. by Ted Mark
Published by Lancer Books in April 1968 (Fourteenth Printing)


The story begins with Steve Victor explaining that he is an expert in sex and has a Ph.D to prove it. He set up O.R.G.Y., the Organization for the Rational Guidance of Youth, as a way to receive grants to support his lifestyle. He is walking around the red light district in Damascus and hears a woman scream. He comes to the rescue of a beautiful woman who has run away from a Shiekh Taj-ed el Atassi's  harem. Unfortunately for Steve, the three men intent on raping the young woman are too much to for him to handle. Luckily, the police arrive, the thugs run off and Steve and Teska are brought to the police station.

And here is where our story really gets under way. The local police question Steve and hand him over to the American embassy where he is recruited by the mysterious Charles Putnam to find Anna Kirkov, the daughter of a Russian nuclear scientist. To do so, it will appear that he is a defector working with the Russians. Anna was last seen at the Shiekh's harem.

The ending was not really what I expected. Needless to say, Steve Victor killed the bad guy and saved the girl. Miss Kirkov, who was kidnapped by Ben Narouz so the Red Chinese could get Russia's nuclear secrets, is handed back over to the Russians. The Russians believe that she is a defector and she can't expect any help from her father, the well respected party member, because he has defected to the Red Chinese. It's a rather good cold war twist. But Mr. Victor's conquests are not complete because he doesn't get to bed the sexy British Intelligence agent who caught him earlier, so what does he do? Why go to a brothel, of course.
The book contains quite a few sexual situations including one particularly nasty rape scene when Ben Narouz has Anna Kirkov gang raped by four Chinese thugs and a dog in his attempt to convince a woman to give herself to him freely. I found that scene quite distasteful, to say the least. Some of Steve's sordid encounters are written in a way to appear somewhat sophisticated by making reference to the Kama Sutra and the sexual practices of other cultures.  There was one clever bit where the villain reveals that the Gulf of Tonkin crisis is his doing in order for their ship to make port in South Vietnam without being detected by the Americans.

I haven't decided if I liked this book or not.  I wasn't offended and it was a somewhat enjoyable read, for the most part. I'll eventually read the second book, but it's not a high priority.

I was wondering when you were going to get around to this one! As expected, it's spy smut. Tinto Brass or Joe D'Amato should have shot this soon after its publication - might have been interesting.

Spy Smut indeed. There was actually a Man From O.R.G.Y. movie released back in 1970. I think it was released once on VHS, but it's rather hard to find now. I imagine it would be a lot tamer than the books.