The second episode of the first season of MacGyver opens, like most of the early episodes, with an opening gambit that is reminiscent of the pre-title sequence of a James Bond film. It's the action packed end of our hero's previous mission which has no relation to the main story of our episode. MacGyver has followed a man with briefcase to a junk yard. This briefcase contains top secret Pentagon missile launch codes. He's there to sell the codes to an unnamed party and Mac's got to stop them.

Using a crane with a magnetic lift, he snatches the briefcase, and codes, and takes off. A short chase through the junk yard concludes with Mac being knocked unconscious. He awakens to find himself tied up in the back of a car that is about to be flattened. Thinking quickly, MacGyver rips off the back seat cushion, climbs into the boot and pops the trunk open with a tire iron; all without being seen by the heavies. A short forklift ride later and MacGyver has trapped the bad guys, recovered the briefcase and called in the cavalry. It sounds like a rather good start, but this opening gambit lacks any sense of excitement or danger. 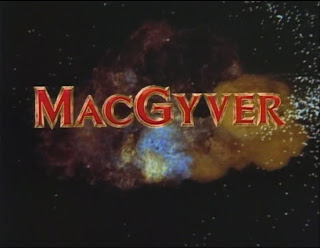 Our main story opens when a highly decorated military officer assigns MacGyver the task of heading off to Burma to recover a canister of poison from a crashed plane. He only has 24 hours to find the canister and make it back to the chopper.

It's not long before Mac runs into a group of villagers who are being used as slave labor to harvest opium for General Narai, the local drug lord. It is also here where we first begin hearing some truly dreadful dialogue. With the help of a boy from the village, Mac locates the crashed plane, but the canister is missing. Worse yet, the drug lord's minions capture MacGyver who are convinced that he's a narcotics agent. 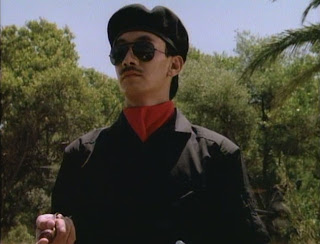 General Narai isn't happy that his slaves are taking too long to harvest his poppies and will return in five days to collect his opium, or else! While he's lecturing the villagers and being shown the weapons from the crashed plane, Mac spots the canister. But here's where Mac's luck runs out. As a warning not to cross the general, MacGyver will be staked out at the head of the trail with no food or water for the five days that Narai will be gone. 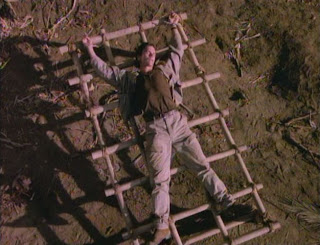 The little boy who showed Mac the plane feels badly for him and decides to steal the trusty Swiss Army Knife to help MacGyver escape - which he does. Mac sneaks back to the village and using this episode's sole MacGyverism creates a diversion which helps him recover the canister. Using a signal flare as a fuse and a life raft air pump, the boat inflates, the flare pops and a small explosion is created. Mac kicks the snot out of some thugs, blows up a jeep with another flare and the rest of the baddies run back to General Narai. 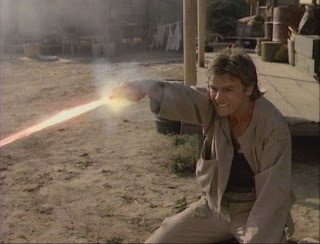 The villagers are now in turmoil as they know Narai will return and he won't be too happy with them. Some want to work harder to harvest the rest of the opium while the rest want to fight back for their freedom. MacGyver tells them to decide what they want to do as he takes off to meet the chopper. 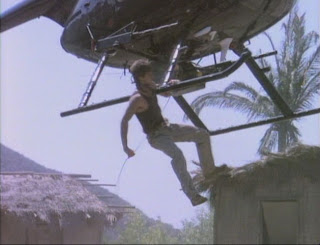 The general and his chopper are soon back, this time with mounted machine guns. Mac is able to attach a steel cable from a Jeep's winch to the helicopter and force it to land where he proceeds to punch out General Narai. It looks like Mac is in trouble when Narai pulls out a sword, but he trips and falls on it. The rein of terror is over and the villagers are now free. With only a single MacGyverism, some truly terrible dialogue, a weak opening gambit and a weak ending, this episode isn't as good as the pilot - but it's not terrible either. It's a solid early entry into the adventures of MacGver.