I believe it was back in the Latest Acquisitions Video for August that I said I would go through the special features on the Witchfinder General Blu-ray and report on which titles are viewable with a Region A player. To be honest, I forgot all about it until I stumbled upon that flyer for the upcoming Vincentennial. The Odeon Entertainment release is marked Region A, B, C on the packaging, so the film is viewable, but most of the special features are in PAL, so if you won't be able to watch them on a standard Region A player. 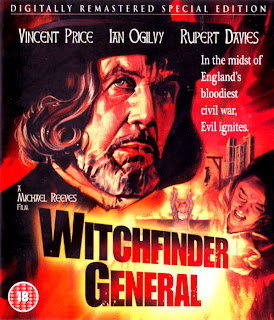 Here is a complete listing of the special features:

So, what can you watch with a Region A player? Aside from the stills gallery and the feature with or without the commentary track, the Alternate Open & Closing Credits is the single special feature that you can watch. It is also the only special feature that is in HD, everything else is standard def and in PAL. Just remember, "there's lots of screaming when there's this much at stake!"