Halloween season is upon us and I've been in the horror movie mood. Here's a little interview with the late Gloria Stuart from issue #214 of Famous Monsters of Filmland. 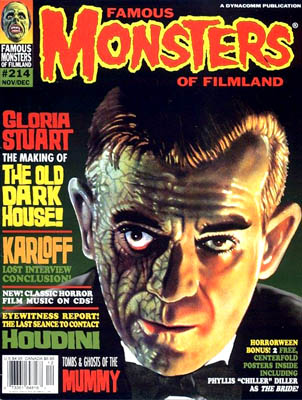 Comments From Gloria Stuart
FM: Does The Old Dark House stand out from other movies that you've made in your career?
GS: Oh, absolutely. I consider it the best film that I've made, and of course James Whale the best director, and the cast the best cast I've ever worked with. They were all trained theater people, and I was really in A-1, very fast company.

FM: How old were you when you made that film?
GS: I was 22. I think I'd made two pictures before - the Kay Francis one at Warner Bros, Street of Women, and Airmail with John Ford. I think it was the third picture I made for Universal, in 1932.
FM: What was it like, being directed by James Whale?GS: In the first place, James Whale had been an actor, and for an actor to be directed by an actor, at least you have the feeling that he knows what he wants and he knows how to tell you what he wants. Besides that, he had been a cartoonist and a set designer, so I felt that the set that he used, and the props that he used - for example, the finger shadow exercise that he gave me was pure James Whale... the passing of the potatoes, and finding the little black spots... the throwing of the bouquet by Mr. Femm into the fire - all of these were James Whale's inventions, they were not in the novel, they were not in the screenplay. And when you worked with a man who was so creative, and particularly creative as far as you were concerned.

FM: It's interesting that today there's so much attention paid to sex in film, and yet the subject actually seemed a little bit more relaxed in the '30s. The films always had scenes for screen goddesses to seiche for the camera and the look was of trim figured women, usually braless, in form hugging gowns. Then here we have a "horror" film and your undressing scene is an attention getter in direct contrast to Rebecca's horrific monologue. How did that impact you as an actress at that stage in your career?
GS: Well, you know, whatever James wanted me to do, I did, because I trusted him implicitly. So, okay, I had to take my dress off and be in what we called "teddies," "teddy bears" in those days, but let me tell you something about doing that scene. I said to James, "I don't understand, James, why you put me in a pale pink bias-cut silk-velvet gown with pearls and earrings, when everybody else at dinner is in sopping wet dirty clothes! I don't understand it." I didn't say to him, "It doesn't make sense," because you don't say that to the director; I said, "I don't understand it." He said, "Look, Gloria, when Boris chases you through the halls I want you to look like a white flame!" and off we went. But photographically he wanted me to stand out when I was being threatened by Karloff. It's not legitimate, but it was very effective. 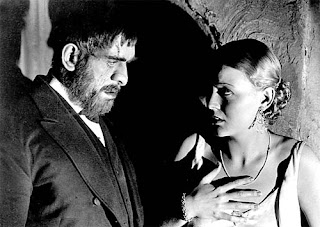 FM: Yes, and I think that's one of the reasons it's held up. What was working on set like?
GS: The pervading atmosphere was of very elite British actors from the English theatre. They had elevensies and foursies every day, but they never asked Melvyn Douglas, who was an American, and me, who was an American, to share the tea with them. And so, they would gather in a circle at 11 and 4 and have their tea - it would be brought in from the commissary. And Melvyn and I were left unwanted, uninvited and ignored. But it worked very nicely, because during that time the Screen Actors Guild was being formed, and Melvyn and his wife were two of the leaders in forming it. They had come from the New York theater, where they had gone through that dreadful equity strike that really "killed" people, and so they were very much involved with that. So Melvyn and I were discussing the Guild movement. I always was way over on the left, liberal, and I was very interested in such matters. So they did us a great favor, without knowing it.

FM: How was Boris Karloff different when the cameras were rolling, compared to when the cameras were off?GS: Oh, he was very quiet, very retiring, very modest. The whole English cast was very laid back. On most of the sets that I worked there was what we called fun-and-games, a lot of kidding around, a lot of dirty tricks, a lot of that sort of thing - very relaxed, very easy. This set was very, very different, and there wasn't any kidding around, there weren't any jokes, no byplay, nothing like that. So Karloff, along with Laughton and Lilian Bond and Thesiger and Eva Moore, all of them were very reserved and very apart.

FM: Famous Monsters is attracting a lot of youngsters again who have a fascination for these "newly discovered" treasures. Are you particularly surprised that The Old Dark House, The Invisible Man, Frankenstein and a lot of these old films are still revered after a span of some 60 years?
GS: Oh, yes, I am very surprised. I did a seminar in England at the county museum on Whale a few years ago, and a man in the audience said, "Tell me, Ms. Stuart, how did it feel making classics?" Well, we didn't know we were making classics, you know, we were making movies! I just got back from London, and I had a whole week of "stroking" over the fact that I worked with James three times and these films are classics. They're extraordinary, the English. They remembered more about all of these things than I did and they're very gung-ho as fans of Whale and of those kinds of films.

FM: The Old Dark House had been thought to be lost until a negative was found, we believe in 1968. Now with the incredible Image laserdisc release the film can be enjoyed closer to how it must have originally looked.
GS: Oh, yes. They had the absolute top negative, it's really beautiful - you can see a lot of detail in the set and it's gorgeous. I did a running commentary (on a special analog audio track) on all of the players and all of the scenes and what was involved and so forth. I'm very happy about these laserdiscs of the films. I was trying to analyze it for someone in London - I was on the BBC - and it suddenly came to me that all of my life I've had a thrust toward immortality - I wanted to be known forever. And I always was so frustrated, being an actress, because it's the most evanescent of all of the arts - you know, it's not painting, it's not photography, it's not writing, it's just one performance and it's gone. But now on laserdisc I have my lifelong wish! You're going to have to look at me for a lot of years from now on!

FM: And the pleasure, as they say, will be all ours. 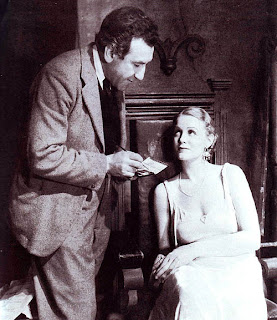