Curse of the Phantom Shadow 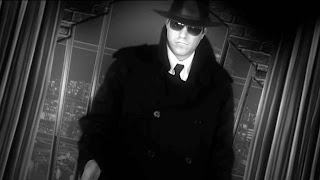 I received an email from independent filmmaker Mark Ross this morning. He was writing to let all of you know about his latest project; it’s called Curse of the Phantom Shadow.

The year is 1948 and World War II has been won, but the United States has a new adversary in the guise of the Phantom Shadow. He plans to use a kidnapped scientist to launch atomic weapons on key locations within the U.S. Only Government Agent 236, along with the help of the beautiful Gas Pump Girl, can put a stop to the Phantom Shadow’s diabolical scheme!

Curse of the Phantom Shadow is a 24 minute short film that harkens back to yesteryear in the tradition of The Shadow, Dick Tracy, Spy Smasher and other pulp magazines, radio dramas and movie serials of the 1930s and 40s. It’s hoped that this proof of concept film with lead to a trilogy of movies featuring the adventures of Agent 236.

But before any features can be made, Curse of the Phantom Shadow must be finished, and here’s where you come in. The film is 75% complete, but the funds have run out. Visit the Curse of the Phantom Shadow Kickstarter Page and help these fine folks complete their project. They're offering incentives such as DVDs, movie posters, screen credits, t-shirts and more for contributing. With only 48 days remaining in their campaign, they’re still short of their goal.

Well, that’s enough of me telling you about how great this project looks (and it really does look like a lot of fun). After all, I just learned of it this morning. Why don’t you watch the promotional video below and let the cast and crew tell you all about it themselves. Check out their website and if you can, make a donation to help complete this project.

And remember, “the weed of crime bears bitter fruit…”