Not Available In Store 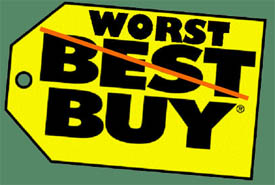 As many of you are probably aware, Best Buy is running their Upgrade and Save promotion where you can bring in any old DVD (except porn) and they will give you a coupon for five dollars off any blu-ray priced at $9.99 and above. And they will take just about any DVD in trade. I've seen people go to the dollar store to pick a bunch of cheapo DVDs and trade them in for $5 coupons (limit 5 coupons per trip).
Just head on over to the Customer Service desk, give them the disc and they'll give you a coupon and a recycling receipt which must be presented when you use the coupon. If you can't find anything to buy at the store, you cannot get your discs back. Not a big deal as you're more than likely bringing them crap that no other used record store would touch.
This all sounds like a pretty good deal, and it is. If you can find something at a good price to purchase. I had the idea that I would trade in some old, worthless budget label DVDs that I had upgraded long ago and use those coupons for some more upgrades, this time to blu-ray.  That means I have the potential to pick up some blu-rays for only $5.
Being in a fairly large city like Chicago, you would imagine that the Best Buy stores around here would carry the titles I'm looking for.  And herein lies the problem.

So, I head over to the Best Buy website to find which stores have the movies I want.  I'll start with the new release of Outland with Sean Connery that came out two weeks ago.  What do I find? Not Available In Store.  That's disappointing, but surely I can find another one.  How about the Chuck Norris epic Lone Wolf McQuade? It only came out one week ago.  I search and find that it's Not Available In Store.  Okay, how about some that I know I've seen at Best Buy in the past - the digibook of the original Clash of the Titans or Escape From L.A. or The Green Berets? You guessed it... Not Available In Store.

Needless to say that not one of the movies on my list (that are priced competitively) are actually available in store. I think I'll head over to Barnes & Noble and pick up another Criterion Collection title before their sale ends.
Posted by Cinema Raiders at 7/24/2012