Warlords of the 21st Century 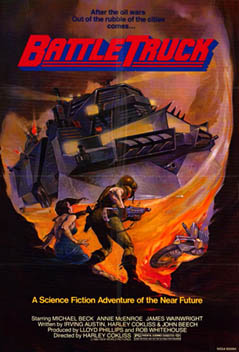 Warlords of the 21st Century
(a.k.a. Battletruck)
It's a high-throttle road warrior epic, a futuristic character study and, most of all, a movie you may NEVER see.
by Jeff Szalay and E.P. Dowd
On last summer's multi-million dollar movie release track, one remarkable little film from New Zealand revved up against major contenders, only to be sidetracked early in the box office race.

The film was Warlords of the 21st Century. Originally released by Roger Corman's New World Pictures regionally in California as Battletruck, this genre vehicle was promptly pulled over for an extensive overhauling of its advertising campaign and labeled with a new title. The original poster artwork featured a monstrous Battletruck explosively smashing everything in its path, echoing the crash-and-kill apocalyptic trend of such highway combat flicks as Damnation Alley, Mad Max, Death Race 2000 and The Road Warrior.

Warlords takes place somewhere, sometime in the near future, in the wake of the oil wars. Nations have collapsed into chaos. There is no governmental authority outside the major cities; many who have fled the dying megalopolis have united in small communities to battle the marauding criminals and outcasts ravaging the countryside. The most murderous "Warlord" is Colonel Straker, a merciless renegade who commands the indestructible Battletruck. Straker has discovered a secret government fuel stockpile and using it as his base camp, he plots a bloody campaign of terror against the nearby community of Clearwater.

But before his plans can be realized, Corlie, his young female companion, escapes his domination, fleeing on foot across rugged countryside, pursued by Straker's men. Surrounded, she is rescued by a mysterious armor-clad road warrior on motorcycle. Hunter, an ex-commando who has turned his back flaps on society and lives a hermit-like existence in a mountain retreat, delivers Corlie to Clearwater. Refuge is short-lived as the community is attacked and destroyed by the maddened Straker, but Corlie has already escaped again. She seeks out the enigmatic Hunter, confronting him with a fateful choice: to maintain his neutrality or to face Straker and his murderous Battletruck.

Although non-stop stunt action is at the heart of this film, its soul is the interrelationship among its three characters. Hunter, played by Michael Beck (of The Warriors, Xanadu, Triumphs of A Man Called Horse), is a grim individualist who has rejected society. Yet, he still cares about human life, and when spurned on by outrage after outrage, he will strike back. He is the respected but reluctant warrior.

Hunter's opponent is the ruthless Straker, portrayed by James Wainwright, a veteran actor best known as the star of the TV series Jigsaw and for his roles in High Plains Drifter and Joe Kidd. Straker is a cold-blooded opportunist. He sees the world degenerating into chaos as an advantage to fulfill his own dreams of power, glory and control. Driven by his insatiable lusts, he executes his plans - and his enemies - with the same flint-edged coldness. His only weaknesses are inflexibility, pride, and love for a girl named Corlie.

She is played by gravel-voiced Annie McEnroe, a stunning young actress who scored as Michael Caine's ill-fated co-ed lover in The Hand. In Warriors, she is once again a victim of circumstances, tormented by her love for Straker and her hatred of the man and what he represents. She flees in search of a peaceful future, but first she must end her own violent past.

For writer/director Harley Cokliss, second unit director of The Empire Strikes Back, this tripartite relationship provided the movie's most fascinating moments. "What I was trying to do in the film was to give each character a certain amount of duality," he says. "Straker, the 'evil king,' is plagued by his obsession for Corlie. He's an interesting, yet vulnerable kind of villain. Corlie is 'a damsel in distress,' though she's kind of ambiguous and manipulative. She knows what she wants and uses other people to get it. People  actually get killed because she doesn't reveal her own identity. All she can say is, 'I'm sorry, I didn't mean it.' There's this kind of terrible attraction/repulsion which exists between them, like when she says, "can't stay with you, you know that.'"
The specific nature of the affiliation between the evil Straker and the lovely Corlie is hinted at throughout the storyline. Their actual secret is confidential, shocking and not what you might expect. "We had to decide 'How explicit do you want to make it?'," Cokliss explains. "My feeling was we should go for a PG-rating because we wanted the film to be accessible to kids. It's an exciting story about a future world that today's kids may actually live in one day.
"Still, I was interested in having the characters' motivation be adult. We tried to walk the line; it's there for those who see it, yet it doesn't smack you in the face," he adds. "That's why we chose to be a little circumspect. It is here if you want to find out. To me, it's the main thrust of the film: why does this man pursue this one woman? Three quarters of the way into the film, you realize why - there are clues dropped in dialogue, and you know that she'll run away again and he'll pursue her. It should come as a shock to the audience."
The film's hero, Hunter, resembles earlier cinematic characterizations etched by Clint Eastwood. "We did go back to the origins of Eastwood's character," Cokliss says, "which are the samurai pictures. A man of action should define his character through his actions rather than his dialogue. Of course, we talked about Clint's minimal dialogue and how less is always more. The difference is that Hunter has a moral code. I really see him as a Zen Warrior, because he doesn't seek out conflict. He moves away from it, only picking up the gauntlet when no other option remains.
"He's forced to take a stand. When he lies on the operating table having his wounds dressed, he says, "No, they might come back for me.' Hunter isn't thinking, 'I'm going to protect you,' He knows Straker's men will return for him and that anybody who has helped him will suffer. Hunter is really the reluctant hero who accepts the mantle only when he knows it's inevitable. He knows there can't be two bull mooses in the same part of the forest. Ultimately, he and Straker must come into conflict. But Hunter is the man who picks the time." 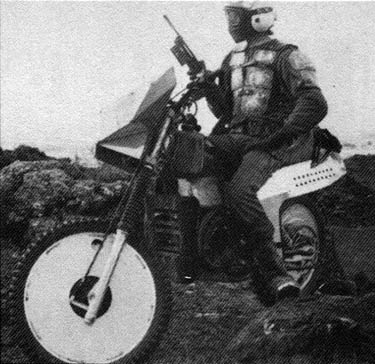 Typically, although Warlords of the 21st Century has yet to throttle into major, nationwide release, a follow-up has been discussed. "There are plans for a sequel," Cokliss says, "in which many things we've begun to develop in this picture will be realized. We only had seven weeks to film Warlords, there were some very complicated sequences and I would have wished for at least 10 additional weeks and more money. What we had to do was boil the picture down to its bare essentials. We had no fat. We actually had to take scenes out in order to finish it within that time frame. I would have liked more scenes which more fully defined Hunter's character and his relationship with Corlie, as well as ones dealing a little more with the alternative technology.
"But we didn't have time to do those things," Cokliss sighs. "that's the type of thing I want to resolve in the sequel, because I know I've raised many questions for the audience. They know at the end of Warlords, the story isn't over for Hunter and Corlie.
"To me, this first film is about the mantle of kingship in a society in transition. It could be a Medieval tale, a Samurai story, a Western. What I wanted as a landscape, or time, to play out a story in which everything was without convention - where things were shaken up, unleashed, and literally could rattle around and reassemble themselves. In chaotic times, where there are those who oppose authority and law and order, you have people who band together in tribes. And you have this bandit king, a Warlord, call him what you will, trying to carve out his own territory and impose his will. Yet, he is not destined to be this land's ruler because of various reasons. Warlords is like King Lear in that sense. And you wonder, when he dies, who will fill that void? I do have certain ideas how that leadership void will be filled in this world, and that's what I hope to take up in the next picture." 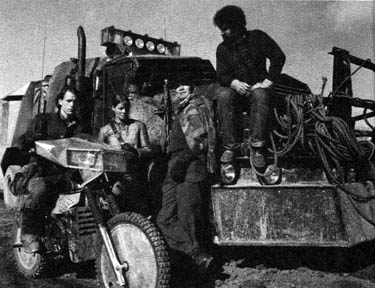 Warlords was filmed entirely on location in New Zealand, in the remote Central Otago region of South Island. The unspoiled barren landscape helps to personify society's collapse and the primitive isolation forced on the survivors in the post-oil-war world. With few modern technological conveniences available, more practical alternatives must be substituted. "Obviously, people are not going to stop traveling," Cokliss explains, detailing the futuristic tourist mind. "There are jokes about Volkswagens lasting forever. Well, I think the idea of two horses pulling a converted Volkswagen bus is wonderful! What you see in the film is what we did. There are very few special effects in Warlords. What we did, we did for real.
"The Battletruck, for example," Cokliss says. "It's steel-plated on a chassis, weighing 25 tons. Really! It was an armored truck, and actually went through buildings with hardly a scratch.
"Hunter's motorcycle was designed to run on methane. We postulated that he could brew and compress the gas from the decomposition of waste and vegetable matter. New Zealand, Italy and other countries now run their cars on natural gas. The technology is there for the type of energy-efficient community we created using wind, solar and water power."
Inevitably, comparisons arise between Warlords and the summer's other similar vehicular-combat adventure-fantasy, The Road Warrior (which was filmed in nearby Australia). Both focus on rugged loners, their ultra-fast vehicles and their violent adventurers in a post-holocaust world. Cokliss addresses the differences between the two movies. "I love The Road Warrior! It's a terrific film with some very exciting action sequences, but it's very dark, like a nightmare. The audience doesn't project themselves into that story because it's too bizarre. That's why there was talk among distributors that our film would hurt Road Warrior or visa versa.
"To my mind, they are two very different films, which complement each other. They happen in different time scales; Road Warrior occurs further on in a more bizarre future. Warlords has a very believable, realistic landscape and time. It's very much like a Western in its story dynamics and landscape - a science-fiction Western in a very violent future."
Posted by Cinema Raiders at 4/26/2011