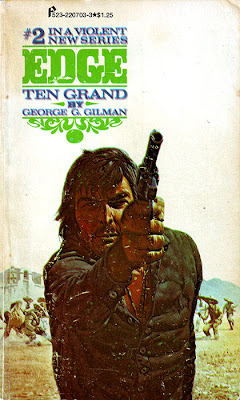 
Our story opens, I assume, after the events of the first book in the series. Edge has been hired as the sheriff of Peaceville after the previous one was killed. While the town is sleeping, El Matador and his band of cutthroat Mexican banditos ride into town and rob the bank. Before Edge can fully awaken, the bandits burst into his office and hold him at gunpoint. After finding and taking his hidden stash of money, they take him as a hostage in order to escape the town.

It's not long before the situation deteriorates and he is left for dead in the middle of the desert. He soon would be dead too, if his quick actions didn't save him from the strike of a deadly rattlesnake. After making his way back to the town, he is warned by Gail, his horizontal refreshment in Peaceville, that two territorial marshals are waiting to arrest him for the $100 bounty on his head. She takes him aside, binds his wound, gives him his gear and her horse before he quickly throws her away.

Edge sets off on the road to Mexico to track down El Matador and get his money back. Along the way, he runs into a band of three of bounty hunters. They try to capture him and he quickly kills the two men, but spares the woman; at least for a while. Although her looks leave much to be desired he does enjoy beating her up every now and again. She also proves useful when the two marshals catch up to him - he pushes her off a cliff to lure them out to their deaths.

We catch back up with El Matador who enters another town where he and his men proceed to rape the pretty women and kill everyone else. Everyone except an old man who remained hidden in the hay loft of a barn who watched the whole scene unfold. The bandits leave and while the old man is sleeping among the bodies, Edge comes across El Matador's trail.

Edge forces the old man to take him to the bandits hiding spot, which he does. Unfortunately, the Mexican Army is already there waiting to capture El Matador and his gang.  Beleiveing that Edge and the old man are bandits, they are taken prisoner.  It is here that we learn that the old man knows the way to a hidden stash of ten thousand American dollars. El Matador now decides to show up and unwittingly rescues them. Using the ten thousand dollars, the old man is able to buy his life, at least for a while.   In a plot point taken out of The Good, The Bad and the Ugly, Edge tells the bandit leader that the old man knows the town the money is hidden in, but only he knows the location.

They all set off in search of the gold. The bandits get restless and decide to torture the old man to get the name of the town from him. He remains resolute and secretly gives the information to Edge which doesn't sit well with them. He finds himself in a knife fight; a knife fight in which he appears to be unarmed. Luckily he has a hidden straight razor which he uses to finish El Matador and make his escape. The bandits are too busy fighting over the money from the bank robbery to put up any kind of pursuit.

Edge heads straight to the town to find the ten thousand dollars but picks up two more partners along the way; one of them is also the only other living person who knows about the hidden stash. Using the old man's ring, which tells the way to the money, they enter the El Serpiente brothel. Events unfold and Edge gets too carried away with finding the money and is caught unawares. A shootout ensues, his "partners" are gunned down, a fire breaks out and the only thing left is a single five dollar bill as a group of rats has used the rest of the money in the building of their nest.

Edge: Ten Grand is the second book in "a violent new series" written by George G. Gilman and the first one that I've read. It was very hard to like the main character, especially with the way he treated the ladies in this story; but, by the end, I was rooting for him. The book has a certain spaghetti western flavor about it, which I really enjoyed.  Edge is a half-breed Mexican/American and I kept picturing Tomas Milian in the role.  The book was being advertised as a "violent new series" and the first page contains this warning "this story is not for the faint-hearted reader." While some of the violence and rapes are sometimes graphic, it's nothing shocking for today's reader. There is even a touch of James Bond added to the mix as Edge is constantly delivering pithy one-liners, which did get rather tiresome after a while. The Edge series proved to be rather popular and ran for a total of 61 books. I will certainly be picking up more when I come across them.
Posted by Cinema Raiders at 8/29/2012