I came across this article a few months ago and promptly forgot which magazine it was in. Being a fan of Bela Lugosi, and having never known this before, I thought I'd share it with the rest of you. Without further delay, here is the article from Famous Monsters of Filmland issue #40. 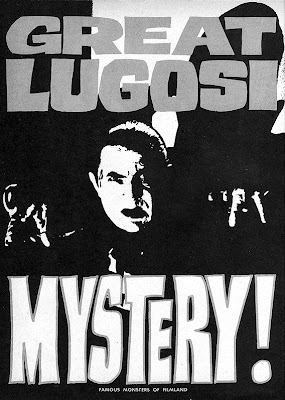 Wait!  That isn't the question.  Ever since we ran that article on "Lugosi's Secret Terror" we've been getting complaints from Belaphiles (that's a gib word for Lugosi fans), some going so far as to brand it a Big Fake. So we won't make the mistake of opening that  hornets' nest again.
Did he, as shockingly revealed in "Inside Lugosi's Haunted House" in the Feb. '66 issue of FM, have 2 sons besides George (Bela Lugosi Jr.) - 2 boys (now middle-aged to elderly men, if living) that he left behind in Hungary? Motion picture personalities make many statements, or permit many stories to be circulated about them, which are untrue, for the sake of publicity, but there would seem to have been no particular advantage to Lugosi's public image for him to have "invented" a pair of sons just for the sake of the readers of a monthly movie magazine.
Was he really in at least 4 films whose titles have not yet been revealed in any filmonster magazine?  Answer: yes! And we will reveal them all - soon.
In the meantime, just to assure you we're telling the truth (and, thanks to Lugosi's friend the producer, Alex Gordon, we have the pictures to prove it) we'll tantalize you and be revealing just one title. Der Tanz Auf Oem Vulkan. That's German. Translation, The Dance of the Volcano!

the sixty-fear dollar question?????Now comes the real stumper, the question that has plagued the minds of filmonster fans every time they've seen a so-called "complete" list of Lugosi's film appearances: DID he appear in Disney's Fantasia? Of course nobody live appeared in the principal cartoon section - but was his voice heard?  Experts agreed: nobody heard his voice.  Then what was the basis for the rumor that he had something to do with Fantasia? In the early 40s I worked at the Academy of Motion Picture Arts & Sciences. I called my old friends there at the archives. They checked out all their sources, came up with a blank, "All we can suggest is that you call the Disney Studios," they said.  I did. The Publicity Dept. there seemed very suspicious of my motives. Somehow I couldn't seem to put across to them that my question was a very innocent one, that I merely wanted them to clear up this mystery for the benefit of you readers. Whoever I was talking to was very uncooperative.  They acted like I was accusing them of something and was going to sue them if they admitted Lugosi had something to do with Fantasia.  Or perhaps if they confessed he didn't. Anyway, they half-heartedly agreed to check their records and call me back.  But my hair has grown gray, waiting for the day.
the supreme authority speaks
Well, who should know best of anybody in the world whether Bela Lugosi had anything to do with Fantasia?  Bela, of course, but he's been dead 10 years. The one living person most likely to know: The head of the Studios himself, the man who made Fantasia: Walt Disney!

So I asked Walt Disney.
Not in a letter.
Not over the phone.
But in person.

I was in Hollywood, next door to the Cinerama theater, having dinner with Wendayne "Rocket to the Rue Morgue" Wahrman when my eyes popped out of my head like Peter Lorre. For who should I recognize sitting all by himself eating dinner but the great Mr. D. himself.

I excused myself from Wendayne and went over to the stool at the counter at which Walt Disney was very calmly sitting, like any simple citizen, having a simple bite to eat and drink. I begged his pardon for the interruption, identified myself as the editor of Famous Monsters and Monster World, then, so as not to intrude on his privacy any longer than necessary, asked him the burning question.

"Yes, we used Bela Lugosi in Fantasia. He pantomimed the scenes for us for A Night on Bare Mountain."

So there you have it. It wasn't his voice that was used in Fantasia. He wasn't - yet he was - seen in the picture.

In the Night on Bare Mountain, when you see the great black demon swirling his cloak on the mountaintop, squint your eyes a bit till the screen becomes hazy... and the phantom figure will be Bela. For after all, the drawing was based on his body movements.

When Fantasia was made, Dracula was there.
Posted by Cinema Raiders at 8/10/2012

No question about it, it's Bela all the way (he was after all a master of pantomime as well)!
-Peter H. Brothers, author of "Devil Bat Diary."

Thanks for the confirmation. I'm also glad to hear that you managed to pick up a copy of the Beyond Atlantis DVD. It sounds as if the tip I sent to the B Movie Cast may have proven useful.