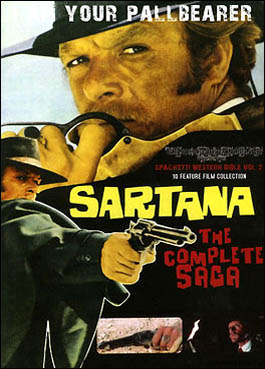 VideoAsia is back with their second collection of spaghetti westerns in the Spaghetti Western Bible Vol. 2

, and this time around sees a marked improvement in quality and titles.  This ten film set is devoted to the character of Sartana, who was originally portrayed by Gianni Garko in 1968's If You Meet Sartana, Pray For Your Death directed by Gianfranco Parolini.  The character, liked Django, turned out to be very popular and spawned many sequels starring many actors in the title role.  Sartana is "one of the coolest and best known characters from the genre, he's often thought of as the 'James Bond of the West' for his stylish dress and use of gadgets and weapons."  Unlike the full title of this set claims, all 18 Sartana films are not included in this 10 film set.  Let's take a look at which titles are:
Disc 1 - Side 1 - Film 1
Have A Good Funeral My Friend, Sartana Will Pay (1971)
Starring: Gianni Garko
Directed by: Giuliano Carnimeo
Music by: Bruno Nicolai
Original Aspect Ratio: 2.35:1
Original Runtime: 96 minutes
DVD Runtime: 92 minutes 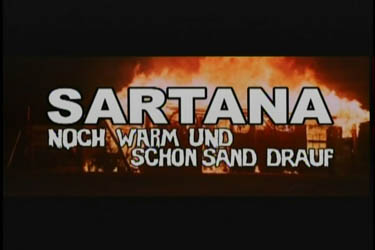 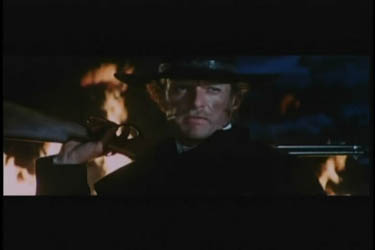 The set begins strongly with a nice widescreen print of this later entry into the Sartana series.  Sartana is the "Angel of Death" and his goal is to kill; not for revenge, but because these low-lifes deserve it.  The film sees Sartana unleash is wrath and James Bond inspired bag of tricks on the town's evil banker and his niece.
Disc 1 - Side 1 - Film 2
I Am Sartana, Your Angel of Death (1969)
Starring: Gianni Garko, Frank Wolff, Klaus Kinski, Gordon Mitchell
Directed by: Giuliano Carnimeo
Music by: Vasco & Mancuso
Original Aspect Ratio: 2.35:1
Original Runtime: 102 minutes
DVD Runtime: 93 minutes 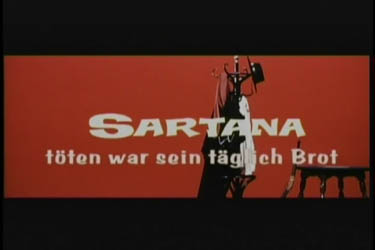 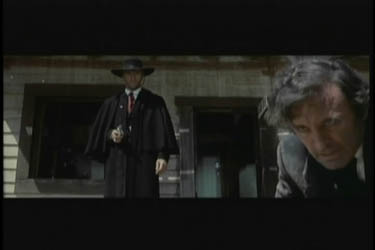 This is the second film in the Sartana series and is presented in another nice print in the original aspect ratio.  Two for two, I wonder if VideoAsia can keep this up.  Someone posing as Sartana robs the Northwestern Bank, the safest bank in the west. A huge bounty is placed on Sartana's head and in come the bounty killers, including Klaus Kinski, to try and claim the reward.
Disc 1 - Side 2 - Film 1
Blood At Sundown (1969)
Starring: Anthony Steffen, Gianni Garko
Directed by: Albert Cardone
Music by: Michele Lacerenza
Original Aspect Ratio: 2.35:1
Original Runtime: 102 minutes
DVD Runtime: 100 minutes 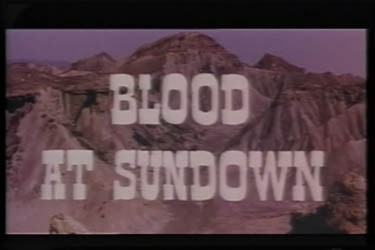 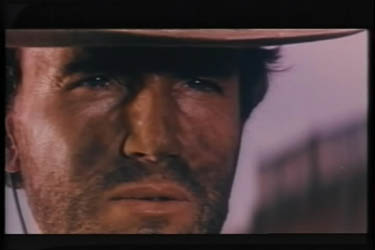 Although not the correct aspect ratio and sourced from VHS, the quality of this one is much better than most titles on the previous release. Blood At Sundown was actually released in 1967 with the title of One Thousand Dollars on the Black where Gianni Garko just happens to play a villain named Sartana.  With the success of his other Sartana films, this one was re-released in 1969 and promoted as another entry in the Sartana series. Anthony Steffen and Gianni Garko play brothers, one good and one evil.  Steffen is wrongly imprisoned for a murder that Garko committed.  When Steffen gets out of jail, he returns to find that his evil brother has taken over the town and married his girl.  Anthony Steffen has had enough and is out for revenge.
Disc 1 - Side 2 - Film 2
If You Meet Sartana, Pray For Your Death (1968)
Starring: Gianni Garko, Klaus Kinski, William Berger
Directed by: Gianfranco Parolini
Music by: Piero Piccioni
Original Aspect Ratio: 2.35:1
Original Runtime: 95 minutes
DVD Runtime: 91 minutes 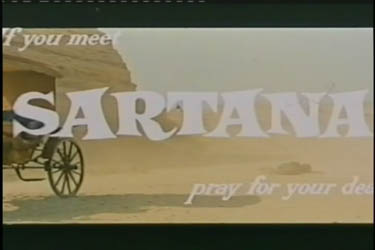 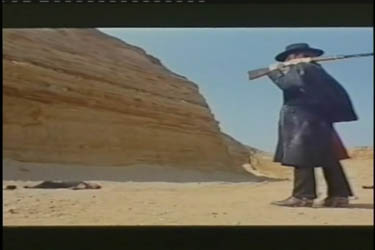 Here's another VHS sourced movie in the wrong aspect ratio, and this set began so well too...  The first of the Sartana series begins as a shipment of gold is robbed by William Berger and his gang - who get machined gunned when they try to double cross him. Berger and Klaus Kinski plan to blackmail the original gold thieves, a banker and his partners.  Unknown to all, Sartana is running the show and setting traps for all involved. 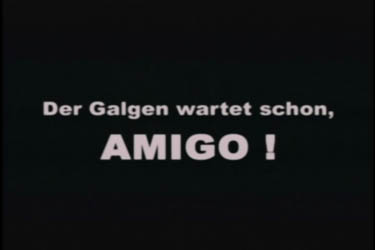 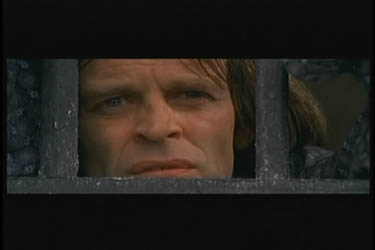 The film opens with the murder of a woman by the unseen killer, a casino is robbed and the bad guys escape in a bloodbath.  Klaus Kinski is wrongly arrested for the robbery and the town judge sees this as the perfect opportunity to hang him.  His attorney pays a visit to Gianni Garko, a retired bounty killer (but not Sartana).  Garko finds the real robbers and Kinski is released, but not before Garko recognizes him as the man who killed the woman at the start of the picture.  Time for a shootout anyone?
Disc 2 - Side 1 - Film 2
Sartana in the Valley of Death (1970)
Starring: William Berger
Directed by: Roberto Mauri
Music by: Augusto Martili
Original Aspect Ratio: 2.35:1
Original Runtime: 95 minutes
DVD Runtime: 79 minutes 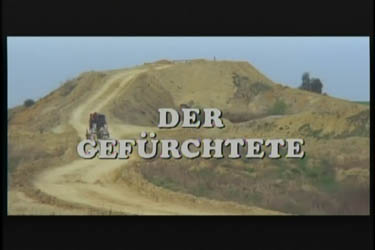 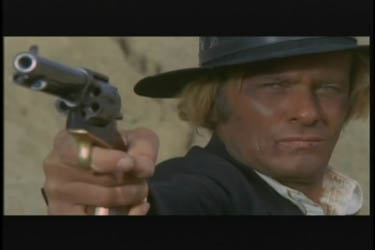 Although not the correct aspect ratio, the print presented here is very nice.  William Berger is hired to break the Douglas brothers out of jail for half of their stolen money.  Once they are safe, the brothers double cross Berger, who escapes into the desert. There he is found by a mysterious woman who brings him back to life - only to turn him in for the reward.  Remember children, crime does not pay. 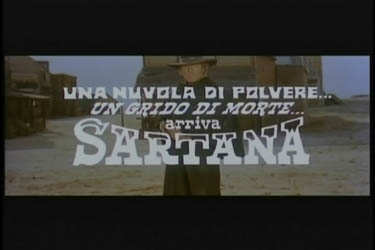 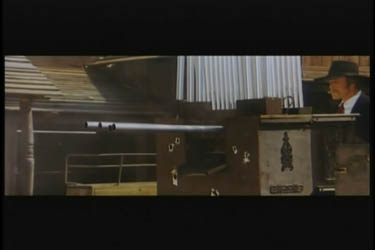 Sartana breaks into the local jail because he hears that a prisoner needs to talk to him. The prisoner was arrested for killing his partner, a crime he claims he didn't commit. Sartana believes him and helps him escape. They travel back to scene of the crime and Sartana finds out he was tricked. It's not a good idea to piss off the "Angel of Death" as Sartana will seek vengeance!
Disc 2 - Side 2 - Film 2
Sartana's Here... Trade Your Pistol For A Coffin (1970)
Starring: George Hilton
Directed by: Giuliano Carnimeo
Music by: Francesco De Masi
Original Aspect Ratio: 2.35:1
Original Runtime: 93 minutes
DVD Runtime: 91 minutes 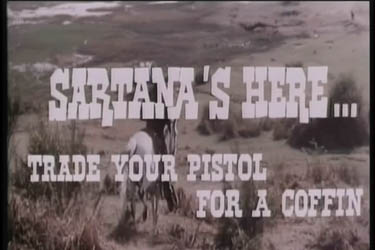 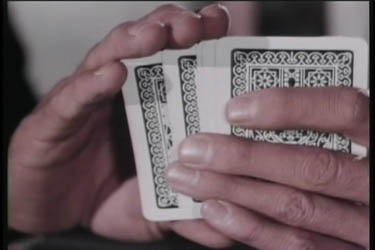 Referred to as I Am Sartana on the packaging and menus, the pan & scan print used has an alternate title of Sartana's Here... Trade Your Pistol For A Coffin.  I don't know about you, but I'd rather have a slightly widescreen print in an incorrect aspect ratio than a pan & scan one any day.  In this one, Sartana and Sabata (no, not Lee Van Cleef's Sabata) team up to take on a crooked banker and a Mexican bandito.
Disc 3 - Film 1
One Damned Day At Dawn Django Meets Sartana (1970)
Starring: Fabio Testi, Hunt Powers
Directed by: Demofilo Fidani
Music by: Coriolano Gori
Original Aspect Ratio: Not Listed
Original Runtime: Not Listed
DVD Runtime: 82 minutes 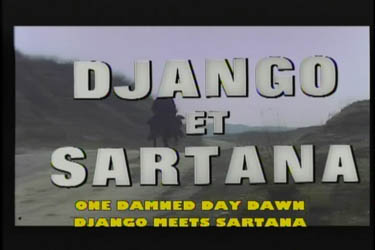 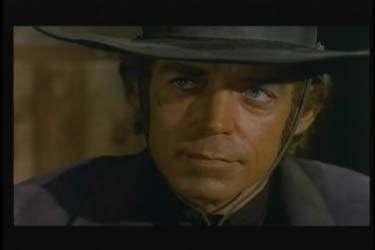 Okay, I can see the reasoning behind titling this one Django and Sartana on the DVD. The print used seems to have forgotten one word in the translated title. Fabio Testi arrives in town as the new sheriff and quickly discovers that there is trouble brewing in town. The town boss and his gang are running a gun trafficking scheme.  Django is also lurking around town watching all that happens.  Eventually, Fabio Testi and Django team up to clean up the town one damned day at dawn.
Disc 3 - Film 2
Django and Sartana Are Coming, It's The End (1970)
Starring: Hunt Powers, Gordon Mitchell
Directed by: Demofilo Fidani
Music by: Coriolano Gori
Original Aspect Ratio: Not Listed
Original Runtime: 96 minutes
DVD Runtime: 84 minutes 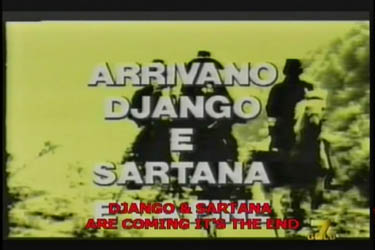 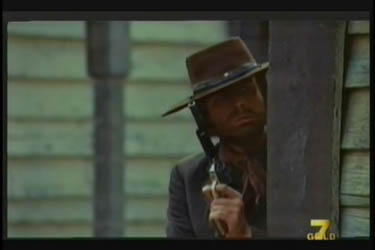 Referred to as Django vs Sartana on the packaging and menus, Django and Sartana Are Coming, It's The End is the last movie in the collection and it is the weakest one.  The print appears to be taken from a television broadcast, complete with the Station ID in the lower right corner. The daughter of a wealthy land-owner is kidnapped by outlaws. He hires Django and Sartana to rescue her.

-----
The Spaghetti Western Bible Vol. 2 is an enormous improvement

over Volume 1. All ten films are actually spaghetti westerns this time around and most of the prints used are of high quality. In my book, this one is worth picking up.  Let's just hope the next entry in the series at least retains these higher standards if not improves upon them.
Posted by Cinema Raiders at 1/02/2011