You Know His Number 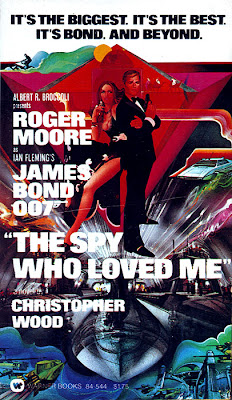 The Spy Who Loved Me by Christopher Wood
Published by Warner Books in June 1977
An undertaker-murderer-shipping magnate who fancies fish. An assassin with an uncanny resemblance to the most voracious fish. A beautiful, courageous girl who is angling for the very prize Bond is after. These are Bond's adversaries as he searches for a lost submarine and the detection system than can penetrate the secrets of the deep. 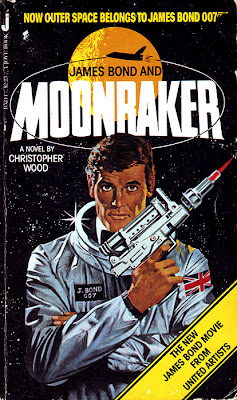 Moonraker by Christopher Wood
Published by Jove in July 1979
Drax is no gentleman. He cheats at cards, and he plans to murder 8 1/4 million people in 36 seconds. It's up to James Bond: Agent 007 and his nearly-nude sidekick Holly to teach the man proper manners. Fast - before his orbiting superweapon strikes!
James Bond Is Back! In every field there is one name - whether it is Rolls Royce, Chivas Regal or James Bond - that means quite simply "the best." 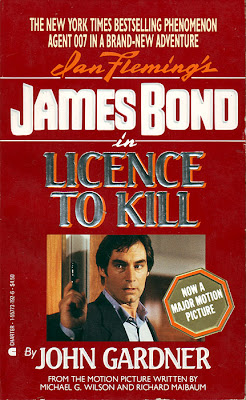 Licence To Kill by John Gardner
Published by Charter Books in June 1989
What starts out as a joyous wedding of his old friend Felix Leiter becomes a nightmare for secret agent James Bond. Now, on a path of revenge against an evil billionaire drug lord, 007 is prepared to do anything. Ignore Secret Service orders. Even lost is licence to kill... 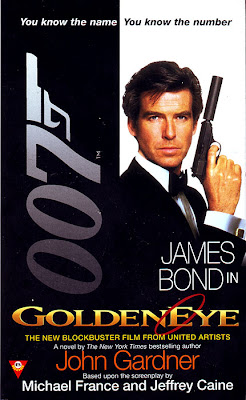 GoldenEye by John Gardner
Published by Boulevard Books in November 1995
She is beautiful. She is Russian. And she is very dangerous. Once Xenia worked for the KGB. But her new master is Janus, a powerful and ambitious Russian gang that no longer cares about ideology. Janus's ambitions are money and power; its normal business methods are theft and murder. And it has just acquired GoldenEye, a piece of high-tech space technology with the power to destroy or corrupt the West's financial markets.
But Janus has underestimated its most determined enemy... James Bond. 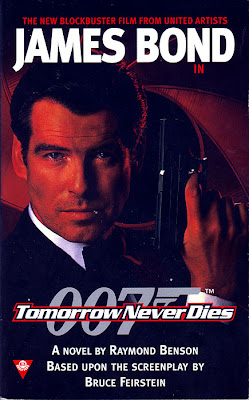 Tomorrow Never Dies by Raymond Benson
Published by Boulevard Books in December 1997
A man who can start a war anytime and anyplace - and profit from it - would be the most powerful man in the world. Elliot Carver knows this. And he has a plan to turn his media conglomerate into a true empire, exploiting global conflicts he creates with on-the-spot news coverage guaranteed to bring him the highest ratings in television history.
It starts with a sudden mysterious skirmish that leaves two Chinese MiGs and a Royal Navy frigate at the bottom of the South China Sea. It could end with an all-out world war on live TV. But there is one man who can stop it... James Bond. 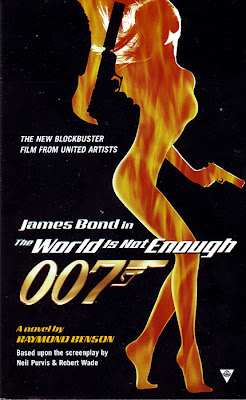 The World Is Not Enough by Raymond Benson
Published by Boulevard Books in October 1999
After oil tycoon Sir Robert King is killed in a bombing at MI6 headquarters, his daughter, Elektra, inherits his fortune - billions of dollars worth of oil deposits in the Caspian Sea... and James Bond, 007, as a bodyguard. Her new wealth attracts international interest. But she has also attracted the attentions of her father's killer...
His name is Renard. A bullet lodged in his brain has rendered him unable to feel physical pain, and he has but one reason left to live - revenge. There's only one man who can take the heat between a beautiful heiress, a malicious sociopath and his final diabolical plan.
James Bond in The World Is Not Enough 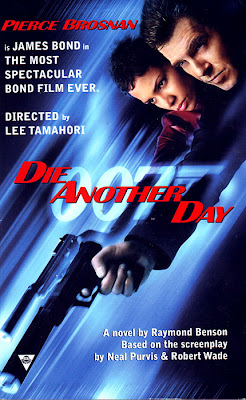 Die Another Day by Raymond Benson
Published by Boulevard Books in November 2002
From North Korea to Iceland, Bond circles the world in his quest to unmask a traitor and prevent a war of catastrophic proportions. Crossing paths with beautiful allies and deadly assassins in a high-octane action adventure of intrigue, revenge and betrayal, never has Bond been so vulnerable, nor so dangerous... 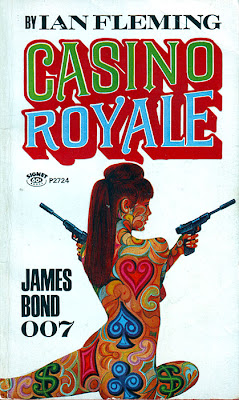 Casino Royale by Ian Fleming
Published by Signet (29th Printing)
A fiery love affair with a sensuous lady spy... Fiendish torture at the hand of a master sadist... These are just two of the cards secret agent James Bond draws when he declares war on Le Chiffre, French Communist and paymaster for SMERSH. The weapon is a fifty-million-franc game of baccarat. The stakes... are life and death. 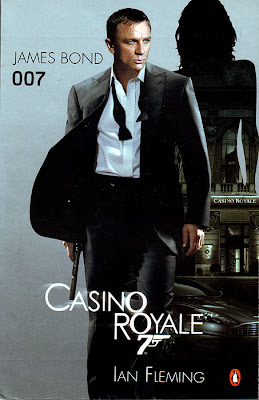 Casino Royale by Ian Fleming
Published by Penguin Books in 2006
This, the first of Fleming's tales of agent 007, finds Bond on a mission to neutralize a lethal, high-rolling Russian operative called simply Le Chiffre - by ruining him at the baccarat table and forcing his Soviet spymasters to "retire" him. It seems that lady luck is taken with James - Le Chiffre has hit a losing streak. But some people just refuse to play by the rules, and Bond's attraction to a beautiful female agent leads him to disaster and an unexpected saviour.