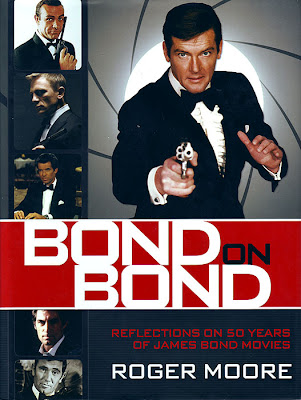 
When this book was announced, I was somewhat interested as I have Roger Moore’s previous book sitting on my shelf waiting to be read. The following description was released, “The Bond movies remain the longest continually running film series in movie history, and 2012 marks its fiftieth anniversary. To celebrate these films and their cultural heritage, Roger Moore has written a book that features all the Bond movies, along with a wonderfully witty account of his own involvement in them. From the girls to the villains, the cocktails to the cars, and gadgets to the locations and everything else, this beautiful book is illustrated with hundreds of iconic images from all the films plus many previously unseen photos from Moore’s personal collection. This is the ultimate James Bond book, written by the ultimate insider, with all the affection and good humor we’ve come to expect from Roger Moore” and I knew that I needed to read this book.  It sounded like a good time with Sir Roger Moore giving his opinions on all things Bond. Sounds fun, right?
And I imagine it would be, but this book does not deliver in this regard. The book is broken down with chapters devoted to the villains, the girls, the gadgets, the cars, the locations, etc. The first seven chapters are merely Roger Moore telling us the same things that have been told in many books and documentaries over the years.  We learn about how Harry Saltzman and Cubby Broccoli first created Bond, we learn about Sean Connery being cast and we read about the villains, girls, gadgets, cars, etc. that appeared in each film; but not Moore’s opinions on these things. He throws in some one-liners (some are cringe inducing) and anecdotes along the way, but most of these are merely re-hashes of things we've heard before.
The next three chapters entitled “Bond On Bonds”, “Bond Behind the Scenes” and “Bond On Screen” are the best three chapters in the entire book because here the book delivers. We get Roger Moore’s opinions on each of the actors who have played 007 and some interesting behind the scenes stories on the making of the films. It’s also nice to read a little about the rival Bond film Never Say Never Again and its release the same year as Moore’s Octopussy – I just wish it was more in depth. The final chapter, while featuring some nice poster artwork, feels like it was just added on for filler as it’s merely a listing of the filmmakers, budgets and box office receipts for each film.  The book is nicely put together and features many photos, some of which I hadn’t seen before.
But I have to call out Sir Roger on one thing. He goes on to describe the first time a wet bike is used on screen and delivers some behind the scenes details very nicely, but it’s in The Spy Who Love Me and not For Your Eyes Only.  You were in both those movies, so surely you shouldn’t have made that mistake.  Don’t get me wrong, the book is well written and it’s a quick and enjoyable read, but there’s not much new here for the avid Bond fan. Ultimately, this book by the ultimate insider is not the ultimate James Bond book.