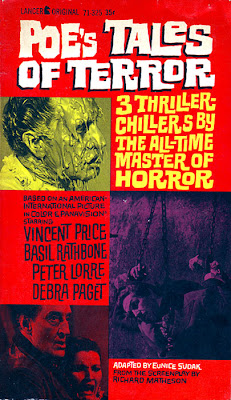 The Black Cat, in which a husband walls up his beautiful wife and her lover.

The Case of M. Valdemar - the body dies, the mind lives through a fantastic medical experiment.

Morella - the terrifying tale of a dead mother's revenge on the husband and daughter who denied her burial. 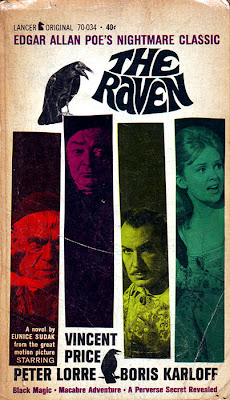 The Raven by Eunice Sudak
Published by Lancer Books in 1963

Who was the raven?
What was his diabolical errand?

Could anyone ignore the warning from beyond the grave?

Do you dare to spend one night in Dr. Scarabus' sinister castle?
Will your heart stand the suspense?

Is your stomach strong enough to bear the brutal torture of an innocent young girl?

And what of the wanton, lustful, beauty whose name was Lenore? 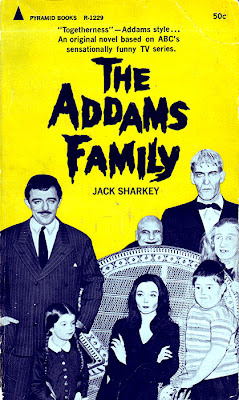 Gomez - master of the house - and several strange powers.

Morticia - dressed in an attractive shroud, she casts a spell over everyone - and everything - around her.

Pugsley - he took in stray kittens - straight into the dog kennel.

Wednesday - a pigtailed daughter whose close friend is a headless doll.

Uncle Fester - loved to feed the dog - to the crocodile.

Plus Granny, Lurch the Butler, and the family retainer, Thing - gift of a friend who had lent the Addams Family a helping hand.

The Addams Family - America's favorite fearsome family can be seen every week in their top-rated ABC-TV show. 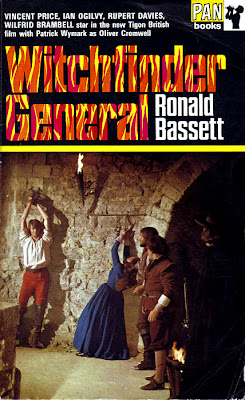 Witchfinder General by Ronald Bassett
Published by Pan Books in 1968

A vivid, colourful and brutal novel - based on the life of Matthew Hopkins, one of the most vicious Englishmen who ever lived.

While Cavaliers and Roundheads are locked in bloody combat, Hopkins - self-appointed Witchfinder General - wages a savage war against the helpless under the pretext they are servants of Satan. Mercilessly he satisfies his appetite for lust and cruelty by spreading a trail of terror through the Eastern Counties. And with every innocent death his purse grew heavier... 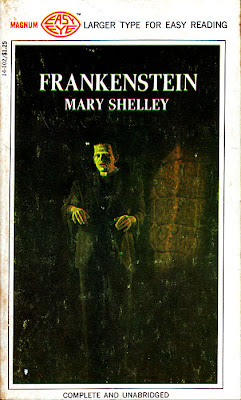 The Face of Frankenstein...

"The dull yellow eye opened. The creature breathed hard. Convulsively, it moved its arms and legs..."

So, after two year's work, did Victor Frankenstein, a philosophy student, see the results of his fantastic laboratory experiment. He had discovered the secret of giving life to inanimate matter and had created - with its yellow, shriveled skin, watery stare and terrible grin - a monster that would turn his own life into a walking nightmare.

Mary Shelley wrote Frankenstein in 1818, when she was only 19 years old, as a simple ghost tale - one, in her own words, "to make the reader dread to look around, to curdle the blood and quicken the beatings of the heart." Its theme, of a man's revenge against a society that rejects him, is still being exploited in novels of today. Frankenstein is also the source of many Hollywood movies. It remains one of the most chilling horror stories of all time. 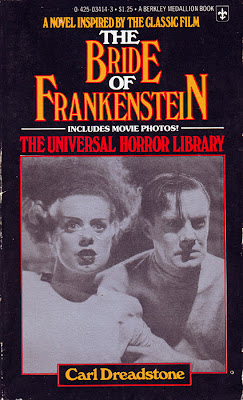 The Monster Was Immortal

Twisting hideously in the flaming ruins of the Mill, it seemed that Baron Henry Frankenstein's creature was finally dying. Yet once created, this life made of corpses was hard to extinguish. And then Professor Praetorius came to Castle Frankenstein. He was brilliant, and completely mad. Why stop at the mere creation of life, he said, when a new world was in the offering?

And what of Elizabeth? Was her love for Henry to be denied in this exploration of evil? Alone in their laboratory, the two scientists fanned the flames of horror, and cared nothing for the cost.
Posted by Cinema Raiders at 10/01/2012