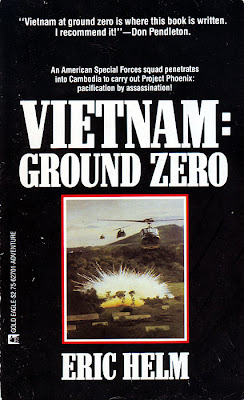 Vietnam: Ground Zero is the first book in a twenty plus book series written by Eric Helm, which is the pen name of two Vietnam veterans. This book takes some ideas directly from Apocalypse Now and expands upon it. In the movie, Willard is being briefed by Harrison Ford and a general we are told "Now he's crossed into Cambodia with his Montagnard army of his... Colonel Kurtz was about to be arrested for murder... Kurtz had ordered the execution of some Vietnamese intelligence agents. Men he believed to be double agents. So he took matters into his own hands." Willard would later read that "they were going to nail his ass to the floorboards for that one. But after the press got a hold of it, they promoted him to full colonel instead." Later when Willard is reading Kurtz's dossier, we learn that in "late summer, autumn 1968. Kurtz's patrol in the highlands is coming under frequent ambush... November. Kurtz orders assassination of three Vietnamese men and one woman... Enemy activity in his old sector dropped off to nothing. Guess he must have hit the right four people."

Vietnam: Ground Zero begins with an ARVN (Army of the Republic of Vietnam - South Vietnamese) unit being ambushed and decimated while on patrol near US Camp A-555. Our men get assigned the task of finding out what happened to them. A patrol leaves the camp and discovers that they have all been killed, but they decide to track the ambushers. It's decided that they are heading towards the Cambodian border and is probably only traveling at night through the jungle, avoiding the rice paddies. Our troops head directly to the border and setup an ambush. They manage to catch the enemy by surprise, but are unable to stop them all from going into Cambodia and escaping. One of the enemy soldiers is wearing the uniform of the Red Chinese; and it's not the first time that he has been spotted.

Back at the firebase, the men brief their CO and they get the idea of taking out the Chinese officer. He heads to MACV headquarters, and talks to his CIA contact who basically gives him the green light to take a squad into Cambodia to assassinate the Chinese officer, just as long as they don't get caught. It's while he's away from the base that he meets up with a female reporter who was given the proper authorization and cooperation to go to Camp A-555 from General Crinshaw, who just so happens has a grudge against the men at the base.

The squad is assembled and it sneaks into Cambodia and eliminates the Chinese officer with extreme prejudice. When they return, General Crinshaw has somehow learned of the mission and is there to arrest the man who led the mission and the man who actually took the shot. Now our guys have to figure out how the general found out and, more importantly, how to get the two men out of jail. Needless to say, the CIA have no knowledge of the mission and will not be of any help. We do find out how the general learned of the mission and it turns out the man is a double agent for the Viet Cong - who takes his own life after he testifies against our troops at the trial.
It's decided that the only way to clear our men is to head back into Cambodia and, with the help of the reporter, take photos of the Chinese involvement with the North Vietnamese. A second patrol sets out to get those photographs, but they run into an enemy patrol near the Ho Chi Minh Trail. Luckily for them, one of the men is a Chinese officer and they are able to capture him. With the threat of going public with the story, General Crinshaw agrees to drop the charges and make the whole thing go away as if it never happened.
Posted by Cinema Raiders at 6/13/2012