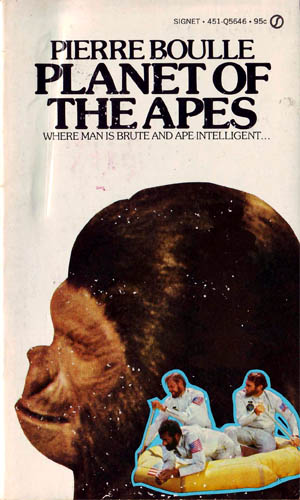 Planet of the Apes by Pierre Boulle
Published by Signet in November 1964 (1st Printing)
Planet of the Apes hurtles the reader into a distant simian world. With delicate irony Boulle dissects the stupidity of established authority, the vanity of human ambition, and the nature of our society. Here is a harrowing, hypnotic novel as meaningful as any of the great masterpieces of satiric literature.
"...respectfully descended from Swift on one side, and Verne on the other." -The Atlantic Monthly
"A fast-moving story, told with irony, subtle wit and imagination." -San Francisco News-Call Bulletin 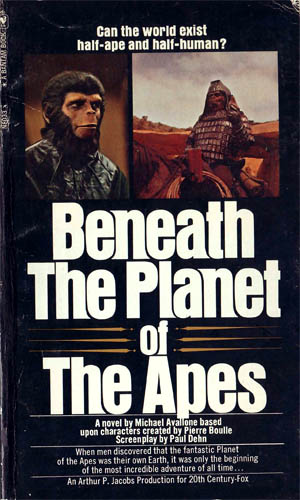 Beneath the Planet of the Apes by Michael Avallone
Published by Bantam Books in April 1974 (3rd Printing)
...in the buried ruins of what was once New York City, lived an incredible race of men, mutated beyond belief by the effects of the ancient Holocaust.

...in the ashes of atomic dust, chimpanzees picketed for peace while their gorilla leaders prepared for war.

...where a great church once shone in the sunlight, dark religious ceremonies paid tribute to the Great Bomb, bringer of life and death.
This is the Earth, thousands of years from now, and this is the story of two men from the 20th century who somersaulted through a time warp into the most plausible and yet most fantastic adventure ever conceived. 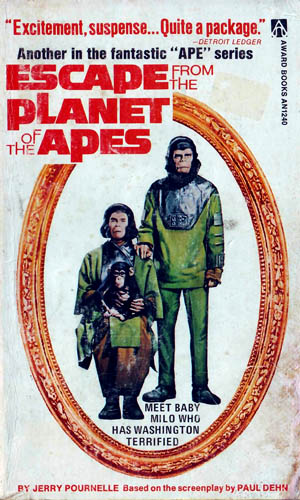 Escape from the Planet of the Apes by Jerry Pournelle
Published by Award Books in 1973
The time indicator raced back through the years - from 3955 to 1973. The spacecraft held the Earth's future inhabitants - three survivors of a devastating cataclysm.
The capsule's occupants included Cornelius, his mate Zira, and Dr. Milo - three Apes, the thinking, speaking descendants of the species that had dominated Man and the Earth for centuries.
The world of 1973 welcomed them at first, pampered them when it realized their unusual qualities, threatened them later when it was learned that Zira carried the seed of the future ascendance of Ape over Man. They had to be killed! But first...
One of the most exciting and inventive movies becomes an enthralling book - Escape from the Planet of the Apes. 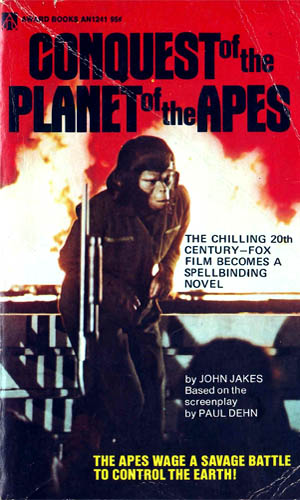 Conquest of the Planet of the Apes by John Jakes
Published by Award Books in 1974
The Time:  1990
The Place:  A gray, tightly computerized city-state, somewhere in North America
The Inhabitants:  Apes who serve as terrified slaves, Men who function as brutalized masters
Until the Apes revolt... in a battle as savage and monstrous as the bondage they'd been forced to endure for decades!
Don't miss the spine-tingling novel based on another in the fantastically successful Planet of the Apes film series! 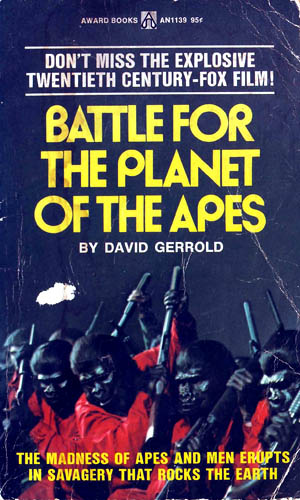 Battle for the Planet of the Apes by David Gerrold
Published by Award Books in 1973
It was a quiet, peaceful city.
It was a city ruled by apes and served by men.
It was a city unaware of an angry band of vicious gorillas anxious to revolt and an insane cadre of mutated humans hungry to kill.
It was a city on the brink of an horrendous destruction that had happened once - and was suddenly, inexorably, happening again...
The apes are back in anew shocker from Twentieth Century-Fox.
Posted by Cinema Raiders at 8/06/2011