The Man in the Beaver Hat 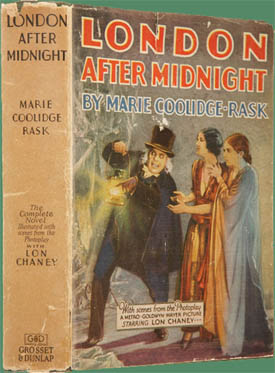 Before the advent of home video, the only way for the general public to relive their favorite films was to read the novelization.  One of the first companies, if not the first, was Grosset & Dunlap. In the 1920's and 30's, they published a number of hardcover movie novelizations.  Some were reprints of classic novels with stills from the films added such as The Phantom of the Opera, The Old Dark House, and Dracula (to name but a few) while others were novelizations of the screenplays.
For one of their titles, the novelization is still one of the only ways to relive the movie.  London After Midnight was released by MGM in 1927 and starred the "man of a thousand faces," Lon Chaney.  From the dust jacket... "A criminal, when hypnotized under proper conditions, will re-enact his crime. On this theory, Burke, Chief Detective Inspector at Scotland Yard, attempts to solve the famous mysteries of the Balfour House where the spirit of Roger Balfour, supposedly a suicide, has been seen at night. The superstition is strengthened when the dead man's casket is found to be empty, and when young Harry, his son, is murdered in the neglected garden of Balfour House, there is a double crime to be traced. The tread of ghostly footsteps, the wail of the banshee, the dread lure of the vampire, the tread of the midnight assassin and numerous other mysterious happenings all play their part in tracking down the murderer - and when the crime is re-enacted, Burke's theories are borne out in an entirely unexpected way."
The silent film, directed by Tod Browning, was one MGM's biggest money-makers of the year. Browning re-made the film in 1935 as Mark of the Vampire

with Bela Lugosi as the vampire. Apparently, this version changed the original story and was cut of fifteen minutes of footage before being released. I find this quite plausable as Lugosi barely appears in the film, and that's its greatest weakness, not enough Lugosi. 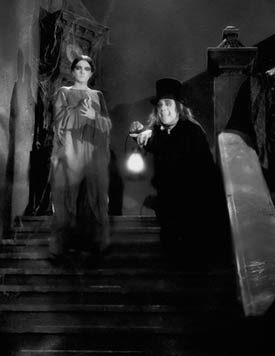 London After Midnight languished (some say rightly so, but this is my website and I won't have any such talk here) in the MGM vaults until 1967 when the last known print was destroyed in a fire.  It has since become, what many believe, the number one lost film.  We don't have the print, but we do have a large number of production stills that have helped the mystique surrounding this lost film grow.  Over the years, such publications as Forrest J. Ackerman's Famous Monsters of Filmland have added to the legend by publishing these stills and offering the comments of those who have seen it.
In 2002, Turner Classic Movies completed a reconstruction of the film using all the known production stills.  While the reconstruction can never replace the missing film, it does make for interesting viewing. The reconstruction is available as part of The Lon Chaney Collection on DVD.

This set also features my favorite Chaney film (that I've seen at least) Laugh, Clown, Laugh.  Back when this set was released, there was talk of a second volume, but none has ever been released.  Hey TCM, where's Volume II?
Marie Coolidge-Rask's original novel has fallen out of print and is very expensive on the collector's market; as is all original London After Midnight material.  However, all is not lost. Last summer, Couch Pumpkin Classics reprinted the London After Midnight novelization

and it's available on Amazon. 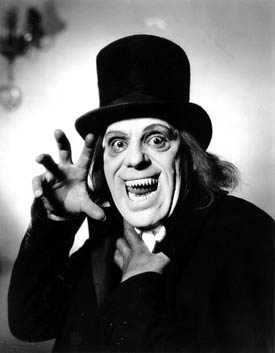 Every few years a new rumor surfaces about a possible lead on finding a print, yet nothing has been found... yet.
Posted by Cinema Raiders at 3/06/2011

Ooooh, this looks good. Will have to pick up a copy from Amazon, though I wish the cover were better.