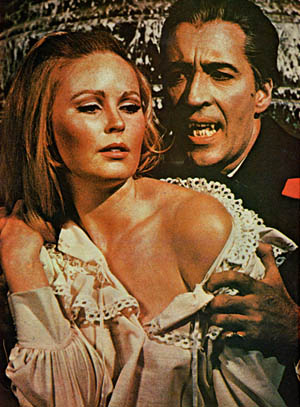 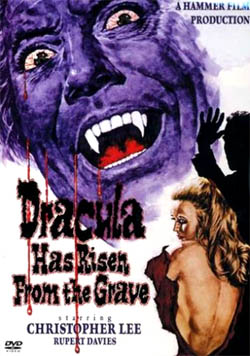 Dracula Has Risen From The Grave is available on DVD from Warner Brothers. There still hasn't been a blu-ray announcement yet...  What are they waiting for?
Posted by Cinema Raiders at 2/22/2011

would love to see this on blu-ray - this was the first HAMMER film I saw in the theater - first run. this film started my lifelong passion for all things HAMMER!
thanks for posting

You know, I have this movie in a collection I got a long time ago but I never got around to seeing it. Life got in the way and it got stuck in the back of my cabinet. When I moved out during my divorce, I had to divide the movie. My ex hated horror, so I gladly took it with the huge collection I have and put it in a prominent place. It's been in the open on my shelf staring me down and now I know I want to put it on and watch it. I'm a nut for all the Hammer films and all the horror, especially British horror, of that era. Thanks for reminding me. I took the movie off the shelf and laid it on the table for this weekend's watching.

I hope you enjoy it. It was the first Hammer film that I ever saw, so I'm a little partial to it. I was hooked from the opening alone. I'd like to know what you think of it.

Wondering if the author of the article is the same Al Taylor who wrote the Making a Monster book. I spoke to some of the makeup artists including Bau who said Al Taylor walked off with stills etc that belonged to his father to use for the book and wouldn't return them. If anyone wants to see a copy of the letter of accusation, I still have it. To this day Bau is still waiting to get his fathers personal belongings back from Taylor.

Dracula Has Risen From The Grave is one of my all time favourite horror films. And it stars the lovely Veronica Carlson too. What more could you ask for?