Indiana Jones and the Movie Marathon 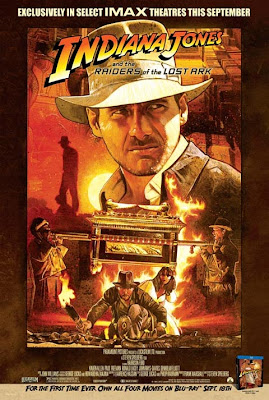 For those with nothing to do on Saturday, AMC and Paramount Pictures are screening all four Indiana Jones movies (at select cinemas only). The $25 entry fee also includes a limited edition poster and lanyard. Will it be the Raiders in Imax poster with the incorrect title as shown above?  For those in Chicago, the River East 21 located downtown at 322 East Illinois Street will be hosting the movie marathon. Click here for more details.

Raiders of the Lost Ark also finishes its one week limited Imax run tomorrow, September 13th. Sadly, the Navy Pier Imax did not show the film...  Here's hoping they get Skyfall this November.
And don't forget, the Indiana Jones Blu-ray set will be released this coming Tuesday. There still has been no word of a US release of the UK Limited Edition Collector's Set. Although the set is region free, reports indicate that many of the special features are in standard definition PAL format. Which means people without region free players will be able to watch the movies, but not all of the special features. It might just be time to finally invest in that region free blu-ray player...