When thinking of George Lucas, a certain ancient Chinese proverb comes to mind... "If it ain't broke, don't fix it." This certainly holds true for Star Wars; he's tampered with original trilogy way too often and has not included the unmolested films in the upcoming blu-ray release. Unfortunately, Mr. Lucas has even messed around with Raiders of the Lost Ark.
The first change, some might argue is a minor one, but is most glaringly obvious - and I loathe this decision. Back in 1999 with the release of the Young Indiana Jones Chronicles on VHS, they changed the name of the movie on all the packaging and have kept it that way on all subsequent releases. The movie is not called Indiana Jones and the Raiders of the Lost Ark!

The second change, first seen in that very same release, is one that I would call a minor change (and one that I don't mind). When Indy first enters the Well of Souls and is face to face with the cobra, if you looked carefully, you used to be able to see a reflection on the glass that separates Harrison Ford from the snake. Seeing the reflection in the original film didn't bother me and its removal doesn't bother me either.
The third change is another one that shouldn't have been made. Someone had the bright idea to "update" a part of the truck chase where the Nazi car goes off the cliff. This CGI effect is quite noticeable and doesn't enhance the movie-going experience. When something like this is done, it pulls you OUT of the movie. It calls attention to the CGI that doesn't match the rest of the scene. I should be grateful they haven't tampered with the film as much as the Star Wars Special Editions; but really guys, if it ain't broke... don't fix it.

Another thing that bothers me is where is the love for Indiana Jones? Star Wars and The Empire Strikes Back both have these very nice in-depth books about the making of the films. One book for each film. Now, I know what you're thinking. You're thinking, "But Indiana Jones has one of those spiffy behind the scenes books." Yes, there is one book and that's the problem. The making of all four films is crammed into one book; I want more. I shouldn't be surprised as this has happened in the past with two-thirds of From Star Wars to Indiana Jones: The Best of the Lucasfilm Archives being devoted to Star Wars and everything else crammed in at the end.

The same rings true, to a lesser extent, on the making of documentary on the Bonus Material DVDs. The Empire of Dreams documentary for Star Wars feels much more well made with a definite structure and higher quality than the one for Indiana Jones - not to mention that the original making of documentaries for Raiders, Temple of Doom and Last Crusade are missing in action. Young Indiana Jones even gets the shaft in this area. Although the DVDs include many documentaries on all the historical figures and events that Indy experiences in his travels, not a single minute of behind the scenes material is included. The only place to see a rather short documentary, with a runtime of less than half an hour, is on the Japanese laserdisc set. I'm just sick and tired of seeing one of my favorite films always taking second stage to everything else from Lucasfilm. Come on Mr. Lucas, give some love to Indiana Jones, put the correct title back on the packaging and release that deluxe blu-ray loaded with every single special feature imaginable.

On a side note, I came across this headline on Google News today... 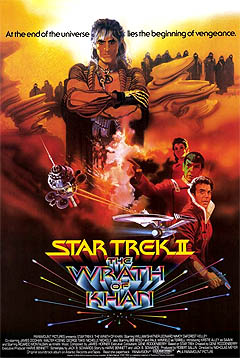 I've seen Star Trek 2 and William Shatner does appear in the movie, you might even say that he stars in it. I know, I know... they're really talking about Star Trek 12...
Posted by Cinema Raiders at 6/21/2011

Yup, these changes truly are a shame. Lucas messes with his older films because he has clearly lost his creativity. If he still had it, he would be making new films instead of changing his old ones.