The Historical Dracula on Film
Part I:  Vlad Tepes (1979) 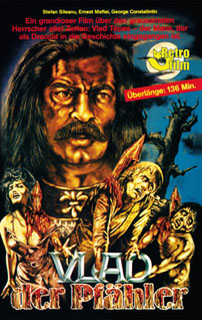 Having just finished reading the out of print Vlad: The Last Confession by C.C. Humphreys (the same author of the Sharpe's-like Jack Absolute series) a few weeks back, I decided to take a look at some of the films that discard the vampire myth and focus on the historical figure of Vlad the Impaler.
Vlad Tepes is a Romanian film released in 1979 starring Stefan Sileanu and directed by Doru Nastase.  Being a film about the historical Dracula, you might imagine a bloody affair full of impalings and battles.  What you get here is a film that tries to be an epic and a tale of political intrigue in the 15th century. 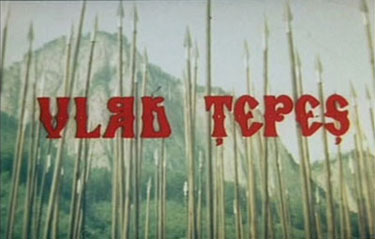 The film opens in 1456 when Mehmet II, sultan of the Ottoman Empire, decides the time is right to conquer Wallachia, and a brief and rather poorly staged battle, in which Vlad becomes voivode, or prince, of Wallachia by an act of treason from a member of the opposing forces.  I'm sure you can guess the traitor's fate. 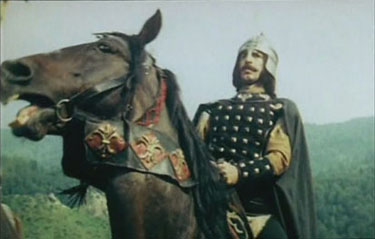 Vlad meets with the boyars, or noblemen.  The country has fallen into a state of fear as the roads are not safe to travel while the boyars line their own pockets with gold.  It is here that Vlad makes his policy.  Trade is regulated to bring prosperity to the land and all prisoners are to be set free, their crimes forgiven.  Justice will be the same for all class of men - impalement.  The boyars see that their time is running out and begin plotting Vlad's downfall.
The story (and all the plotting) progresses and the film begins to show us interpretations of some the legends surrounding Vlad the Impaler.  There is a story of how Vlad placed a golden goblet by the public drinking well in a local town.  The cup was available for all to use, but was never stolen as there was only one punishment for breaking the law.  This exact story is not featured in the film, but a version of it is.
All the cripples, beggars and thieves are invited to a great feast.  When they arrive they are treated to the best foods and wines.  Vlad has the windows and doors sealed and the tavern is burned. 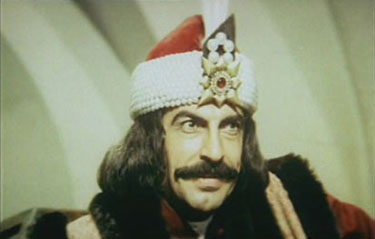 The boyars begin to spread rumors and horror stories that Vlad impales innocent women and children while feasting amongst their corpses.  The rumors and plotting spread and now his own men begin their own plotting.
It is Vlad's main purpose to free his people from the Ottoman Turks who are invading his land.  Vlad and his men disguise themselves in Turkish dress and attack their castles along the Danube and are victorious, yet the plotting continues.
This movie sure does have an overabundance of plotting, counter plotting and scheming going on in it.
Mehmet sends ambassadors to Wallachia in a futile attempt to make peace.  The Turks refuse to remove their turbans in Vlad's presence and he has them nailed to their heads so they can never offend Allah by removing them. 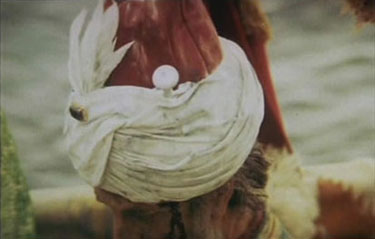 Radu, Vlad's brother and Mehmet's hostage (and lover?), cross the Danube to place Radu on the Wallachian throne.  They find that all the wells have been poisoned and the land devastated.  There is no refuge for the advancing Turkish forces.  Remember, an army marches on its stomach.
As Mehmet approaches the city of Targoviste, he is confronted with a horrible sight - an entire forest of impaled men.  At it's center, a stake reserved for himself.  In a daring night raid, Vlad infiltrates the sultan's camp in an attempt to assassinate him and end the war.  The plan doesn't succeed, but it does convince the sultan that he cannot defeat such a man and decides to retreat. 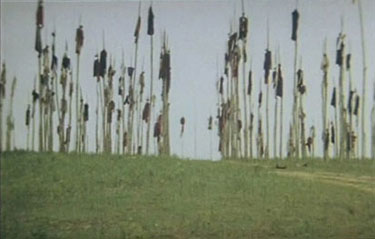 Did I mention there was political plotting in this film?  Unbeknownst to us, Radu has been doing some plotting of his own and has captured the wives and children of the boyars.  He confronts Vlad's forces and delivers an ultimatum that if they all denounce Vlad and accept Radu as voivode, their families will be spared and Mehmet will not conquer Wallachia.  Vlad tells his men that he will pretend to flee, but will return to Targoviste, kill Radu and re-claim the throne.
I hope you didn't think that the boyars have stopped plotting, because they have devised a new scheme.  They will forge letters from Vlad to Mehmet giving Wallachia to the Ottoman Turks and vowing to help them to take Hungary.  The letters are sent to the Hungarian king as Vlad is on his own way there to raise their aid in attacking Radu.  Upon his arrival, he is arrested and the film abruptly ends with text telling us that Vlad spent the next 12 years a prisoner, took back the throne of Wallachia in 1476, reigned for two months and was then killed. 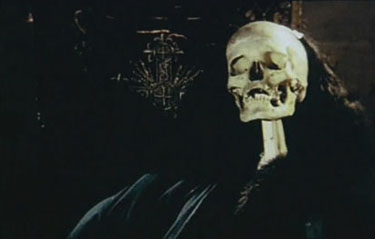 The film does a pretty good job at telling the story of the historical Dracula, or at least what I can remember from the the few books I've read on the subject.  When you watch a film about Vlad the Impaler, you have certain set of expectations.  I find it surprising that there is so little impalement in this movie.  You never see Vlad personally do any acts of violence, accept during the three battle scenes.  Come to think of it, you don't actually see any of the things that come to mind when you think of Vlad Dracula. I was not expecting a political pot-boiler, but it wasn't bad.
It might have helped if I was able to watch the uncut version.  The full 2:14 minute version is available on a Romanian DVD (where the screenshots came from), but there are no English language options or subtitles.  The poor quality gray market version I watched clocks in at 1:42, but it does have English subtitles.
The acting was good, especially Stefan Sileanu as the title character; the sets and locations are adequate; the fight choreography is laughable; and the plot is confusing (at least in the cut version).  The movie tries too hard, and ultimately doesn't pull it off.  This one is little more than a curiosity.