There were several movie tie-in books published for the Hammer horror films, sadly only four of them grace my collection. 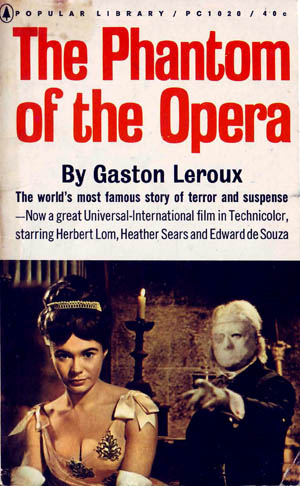 The Phantom of the Opera by Gaston Leroux
Published by Popular Library in 1962.
What macabre cruse hangs of the opera house? What is the mystery of the box no one will ever enter? The Phantom of the Opera, the world's most famous tale of terror and suspense can now be viewed by millions in Universal-International's breathtaking new Technicolor film. 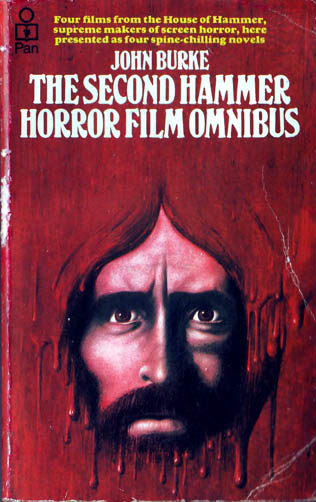 The Second Hammer Horror Film Omnibus by John Burke
Published by PAN Books in 1974 (2nd printing)
The Reptile
From the steaming jungles of Borneo to a remote Cornish village came the fiendish curse that turned a lovely young girl into a nameless horror.
Dracula - Prince of Darkness
Blood mingles with ashes and so becomes a life-giving force to the evil desires of a vampire.
Rasputin - The Mad Monk
Hypnotist, seducer, libertine and drunkard - he ruled the Tsar's court like a devil incarnate.
The Plague of the Zombies
Infamous Voodoo ritual casts its barbarous shadow over a village of "the undead." 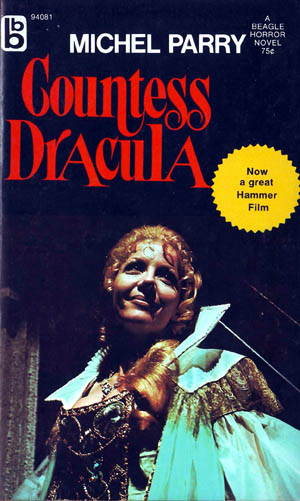 Countess Dracula by Michel Parry
Published by Beagle Books in 1971
The Countess was old. But she had discovered the secret of eternal youth - a secret which spread death and despair among the peasants on her estates. After her husband's death the Countess quickly chose a young lieutenant of the Hussars to take his place in her bed.
Now a Hammer Film Production starring Ingrid Pitt, Produced by Alexander Paal, Directed by Peter Sasdy. Distributed through The Rank Organisation. 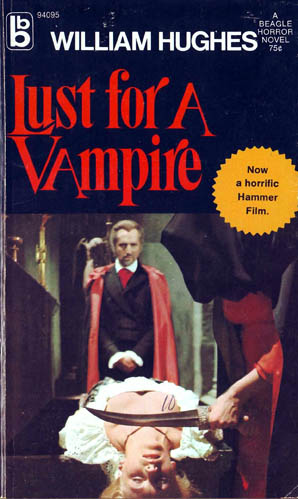 Lust For A Vampire by William Hughes
Published by Beagle Books in 1971
The ruins of Karnstein Castle rose gaunt and menacing over the small hamlet of Styria. Legend had it that every forty years the long dead Karnsteins rose from their graves to find fresh blood and new recruits for the ranks of the Undead. But legend is all too often dismissed as superstition... and now the grounds of Karnstein housed a select finishing school for young ladies.
Now a Hammer Film for Associated British Productions release through MGM - EMI Distributors Ltd. Starring Ralph Bates, Barbara Jefford, Suzanna Leigh, Michael Johnson & Yutte Stensgard. Produced by Harry Fine & Michael Style. Directed by Jimmy Sangster.
From what I've been able to find, the following movie tie-in books were also published:
The Brides of Dracula by Dean Owen
The Devil Rides Out by Dennis Wheatley
The Hammer Horror Film Omnibus by John Burke
Hands of the Ripper by Spencer Shew
Kronos by Hugh Enfield
The Lost Continent by Dennis Wheatley
The Man Who Could Cheat Death by Barre Lyndon
Quatermass and the Pit by Nigel Kneale
The Revenge of Frankenstein by Jimmy Sangster
The Scars of Dracula by Angus Hall
The Vampire Lovers by J. Sheridan le Fanu
The Witches by Peter Curtis
I have no idea if this is a complete listing, but I'd like to compile one. If anyone knows of any more Hammer Horror movie tie-ins that are not listed above, please post a comment with the title and author (if known) and it will be added to the list.
Posted by Cinema Raiders at 5/10/2011